Vegito Black is often shown to possess a very cold, grumpy and sometimes bitter attitude. Vegito Black is shown to be very wise and strategic in battle, devising plans, and finding weaknesses in his enemies. He has a violent and destructive nature, and a total disregard for humanity. Vegito Black can also become paranoid if he exhausts a lot of energy, and he became paranoid after using Super Black Final Kamehameha.

While still essentially identical, he has a slightly darker skin tone and sterner eyes, along with a somewhat skinnier physique. He has dark outlines around his eyes. His attire consists of a sleeveless dark grey uwagi, green potara earrings, a black undershirt with a turtleneck, a red sash, black pants, White gloves, and white boots.

Vegito Black came to be due to Android 9's wish to have him and Piccolo switch bodies with Vegeta and Vegito respectively. After that they assaulted Tokitoki City and fought against Goku, Vegeta, and Future Trunks until Vegeta Black and Vegito Black fused in to V.

However, sometime after Time Crusade; the two were called back into action by Chronoa in order to rescue the Future Dragon Team and stop the Dark Empire. Vegito Black and the rest of the Dark Dragon Team are captured by Salsa after a brief battle where they eventually escape.

Vegeta Black used the Dark Dragon Balls to have Piccolo from Age 1000 to switch bodies with Vegito from Goku Black's unaltered timeline, and gained its might.

Much like Vegito; he can become Super Saiyan, however he gains electricity sparks like, and was strong enough to raise concern for Future Trunks whom was a Super Saiyan 2, however he doesn't remain in the form for long as he powers up to a Future Super Saiyan. 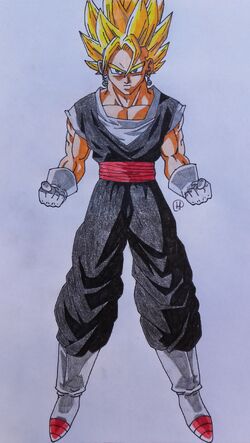 After remembering Chronoa give him the potential to unlocking Limit Removal and his desire to start Salsa reaches breaking point; Vegito Black finally manages to transform into his variant known as Future Super Saiyan Unlimited.

Fused Piccolo is the Potara Fusion of Future Piccolo and Vegito Black.

Both Vegeta Black, and Vegito Black are as powerful as Vegito Blue thanks to the Dragon Balls. He was able to outclass Super Saiyan Blue Trunks even as a Future Super Saiyan. They are both candidate for 11/12 on the Rival Scale. He noted that he was unable to access the powers gained from Piccolo's battle against Chocolay however thanks to Face; he can now use some of them.

After Naraku augments his power; he becomes even more powerful than before - surpassing Gravoom in power as it was hinted that he was stronger than Vegito Blue.

Retrieved from "https://dragonballfanon.fandom.com/wiki/Vegito_Black?oldid=388320"
Community content is available under CC-BY-SA unless otherwise noted.