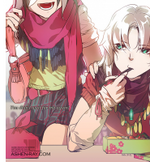 Me and my bros are fans, while my younger sister is all for those reality shows. Bleh!!! My first episode of DBZ was of Bulma and Goku meeting Master Roshi. I read most of the books, and tried to draw Akira Toryiama style. It turned out a wee bit ok, as the SonGolda image is my own, I drew it myself. I've tried out Naruto drawing, but I like the DBZ style better. I really detest animal cruelty, as I heard from my grandmother yesterday that she had taken her small dog, Rocky, had crawled through a hole in a fence..Someone thought it'd be funny to kick poor Rocky, who doesn't even weigh 5 lbs and isnt a threat, and now he lost his eye..When I saw him yesterday I was mad. His jaw had been broken by the kick, and the force had also caused him to lose use of his eye..Now he has a blind spot and can't eat right because of his jaw. The vet sewed him up, and Im still mad about it.

I will draw your OCs for you! :) For the requests, I'lll often ask if you want any specifics, like hair wise clothes poses etc so you'lll most likely get a message from me about it x3

Retrieved from "https://dragonballfanon.fandom.com/wiki/User:YueHatake?oldid=317898"
Community content is available under CC-BY-SA unless otherwise noted.