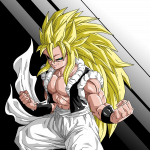 I am an active user who's constantly improving while on this wiki. I have studied DBZ since I was four years old, and now I'm 20. I love DBZ. I love DBZ, I have seen every episode from DB, to the end of GT, along with all of the movies, including the DB movies. I have played many DBZ Video Games. Besides Super, which I'm not fully caught up on.  I know more about DBZ then Akira Toriyama himself (who didn't even know who Broly was in an interview). I've been here since 2009/10 (although I didn't officially make an account until 2011). I love DC and Marvel as well as other fighting cartoons/comics, and video games so you may see the occasional crossover in many of my fics!

The Big Brawl: Coming Together

A story that tells how Bardock came to retrieve his son from Earth after the tournament.

The Clone Saga 15% complete (big project) (On Hiatus) (In Progress)

Surpassing the Legends (Small Project) (On Hiatus) (In Progress)

The Pride of a Prince (big project) (pending)

Vice Shout- The Dimension breaking child tamper tantrum scream first used by Super Buu and subsequently Gotenks. Used by Zuni during one of his rage moments.

What Goes Up Must Come Down!

Vegeta - The right to be arrogant. Saiyan Prince, the best anime character development in the world. Should've been the strongest!

Gotenks - Badass little brat, he is hilarious as hell! The Grim Reaper of Justice! His fighting style with playful and childish yet still deadly combos and techniques/moves is fun to use, with my fanon characters, with him in the fanons, but especially in the games.

Piccolo - thinks he's a badass but is smart as hell

Retrieved from "https://dragonballfanon.fandom.com/wiki/User:Goku484?oldid=393655"
Community content is available under CC-BY-SA unless otherwise noted.