The Universe is the fourth plane of existence. It is where most mortal species reside, and is the main setting for Dragon Ball, Dragon Ball Z, and most of KidVegeta's fanon stories.

The Universe was created by First Generation God Iantos after his sister Dapherion called the Twelve Divines together into a meeting. They were worried about Icaeus' trickster ways and wished for him to have a plane to spread his trickster ways in that was not so close to Mytos. Additionally, all of the other First Generation Gods wanted a place to release their powers into. So Iantos created the Universe below Other World. It was in the Universe where Iantos created many species, including the Daman. His offspring Amoon also created several species, including the Kais. Most mortal species, save for the ogres, demons, and Kais, live in this plane.

Most of the history of Dragon Ball, Dragon Ball Z, and KidVegeta's fanons take place in this plane, as most characters are mortal beings. Thus, the vast majority of the Dragon Ball universe's known history takes place in the Universe. 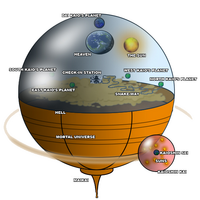 Retrieved from "https://dragonballfanon.fandom.com/wiki/Universe_(KidVegeta)?oldid=395542"
Community content is available under CC-BY-SA unless otherwise noted.