Dragonball Fanon Wiki
Register
Don't have an account?
Sign In
Advertisement
in: Pages by UltimateBreaker, Transformation, Techniques,
and 3 more

Edit
watch 01:36
We're Getting Mutants in the MCU - The Loop
Do you like this video?
Play Sound

Ultra Destroyer ( ウルトラデストロイヤー Urutoradesutoroiyā ) is the true form of the Grand Minister as well as the combined transformation of Destroyer Form and Perfected Ultra Instinct.

The form does not have an official name from it’s creator, Lord Aizen on YouTube. It is simply called “Grand Priest’s True Form”, or more precisely, “Daishinkan True Form”. I made up my own name for the form which was, of course, the combination of Ultra Instinct and the Destroyer Form, since that is what the transformation basically is made up of.

In this state, the Grand Minister’s height rises significantly from 4’3 to what seems to be about 5’8 or higher in feet. He also becomes much bulkier as his hair points up as if it were a Super Saiyan form. His pants also seem to have grown to exactly his size however for his top wear, or more precisely his “shirt” has disappeared.

Resembling the Destroyer Form, the Grand Minister gains pink-glowing upside down triangle marks on his forehead and his chest, as well as purple glimmering iris’. Resembling the Perfected Ultra Instinct form, he sticks with his white hair and gains an aura with identical colors to the Perfected Ultra Instinct form’s aura when Goku displayed it in the Tournament of Power. Except this time, the aura is glowing in a flame-like effect. He also gains a halo behind him similar to the halo behind Merged Zamasu. However, there are too many details to break down the properties of this halo but one thing is that the halo is outlined in a pink glowing color.

In the form’s debut, the Grand Minister appears on earth, preparing to transform as he releases his arms, rocks float, and wind levels increase significantly. Pink, blue, and white colors appear around the Grand Minister flashing as it releases out of the earth’s atmosphere in a large beam. Then a small, pink twinkle launches itself far into space.

The twinkle disappears as it reveals itself as the Grand Minister in his true form. While in the form, he produces large amounts of wind gales, even in space, presumably showing just how powerful the transformation is. He then purposely releases a horde of enormous explosions, ending the scene.

This is the Saiyan inherited version of Ultra Destroyer. It’s not stronger, it’s just what it looks like when a Saiyan achieves the form and utilizes it. Which consists of “eyebrowless” eyebrows, dim purple hair on the outside of the white hair. This was achieved when Goku and Vegeta in their godly forms, Ultra Ego and Perfected Ultra Instinct used the fusion dance and created Ultra Gogeta. Or when Whis handed Angel Grade Potara Earrings to Goku and Vegeta to make Ultra Vegito. 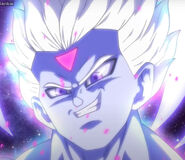 This navigation box is unfinished