Super Saiyan Second Grade is a form a Super Saiyan that Saiyans can transform into after they master Super Saiyan. It is a different branch of transformation than Super Saiyan 2 where the user bulks their body up while Super Saiyan, gaining increased muscle mass and brute strength at the trade-off of lowering your speed and mobility. It is common for a Saiyan to call themselves "Super [Their Name]" when in this form, as with Vegeta when he calls himself "Super Vegeta".

Goku could go Super Saiyan Second Grade in the past, but he prefers Super Saiyan 2, so he never takes this form and likely isn't practiced in the form, either. 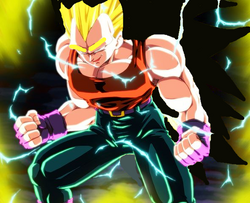 Vegeta used this skill in the past, only pulling it out when Super Saiyan isn't enough, but he can't reach Super Saiyan 2 due to not liking the trade-off.