Super Saiyan 8 is the eighth form of Super Saiyan a Saiyan can take after Super Saiyan 7. When a Super Saiyan 7 goes out of control and continues to gain a lot of energy while angry, their energy will explode out, causing their hair to get even longer. The tips will also be darker in color because of the energy being more focused there. Their fur also is forced off by the energy, revealing glyphs across their body which is actually parts of the ki paths highlighted on their skin because of the energy focusing there. The ki also turns orange, a more pure and powerful color of ki, the stage right after gold. Instead of releasing an aura, all energy remains inside of the body when charging up, instead generating electricity around them from all the magnetic waves coming out of them while they charge. They also gain glyphs behind them when they charge, which is the focal points of their energy, allowing them to fire energy attacks from them without havin to waste time with arm motions. A Super Saiyan 8 can also use Full Aura techniques normally.

A Super Saiyan 8's hair is pinkish with darker pinkish tips and their tail is dark orange. Their fur is also gone replaced with dark orange runes on his body. His aura is replaced with electricity and eight diamondliek glowing glyphs while his beams are orange in color. 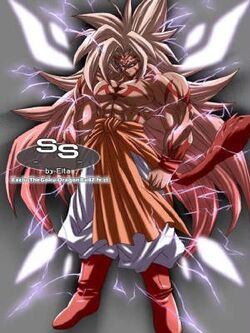 Goku was the first to obtain Super Saiyan 8. He did so while fighting dark DARK TRUNKS while going out of control with anger and power.