Super Saiyan 6 is the sixth form of Super Saiyan a Saiyan can take after Super Saiyan 5. It is a form one achieves while in Super Saiyan 5 and one's emotions are pushed to their limit as well as their power. Instead of other Super Saiyan forms which need simply rage to obtain, Super Saiyan 6 requires immense anguish as well. The user's energy is generated at such an alarming rate that their energy literally errupts from the top of their head, turning it and the aura gold. The energy continues to surge violently from the head even during normal use of the form. This turns the user into a sort of energy beacon, causing them to be easily detectable even from the depths of space.

A Super Saiyan 6 is similar to the Super Saiyan 2 in terms of its differences from the previous form. The hair is exactly the same except for a large gold crest coming from the forehead. The aura reflects this change as well with the part coming off of the gold hair being gold as well while the rest of the aura is white. 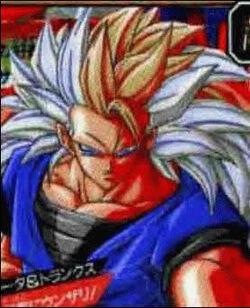 Goku was the first to obtain Super Saiyan 6. He did so while fighting dark TRUNKS after he lost Vegeta, both sons, and his father to dark TRUNKS.