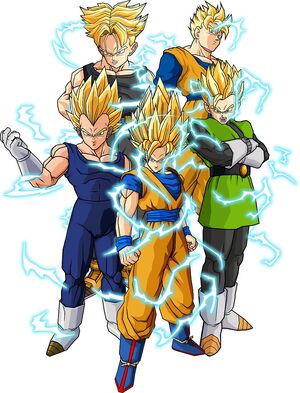 This is the only form of Super Saiyan that Goku did not obtain, master, and perfect first. While he might have arguably mastered it first, he actually learned of it from Gohan instead of the other way around.

Vegeta was the third Saiyan to achieve Super Saiyan 2. He gained it sometime after learning of Super Saiyan after the Cell Games.

Gohan was the first Saiyan to become a Super Saiyan 2. He achieved this form after his friend Android 16 was killed by Cell.

Goten learned Super Saiyan 2 at some point in his life.

Bardock learned Super Saiyan 2 after watching his grandson use it during the Cell Games.

Retrieved from "https://dragonballfanon.fandom.com/wiki/Super_Saiyan_2_(Xz)?oldid=386420"
Community content is available under CC-BY-SA unless otherwise noted.