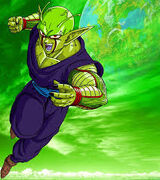 SN4
Add a photo to this gallery

A Super Namek Piccolo looks very slim and muscular rather than looking too musculized. He has a body of a slim and normal teenager and is very very fast for that. 100% Super Namek looks completely different. He looks energized while in the Halo form ( death circle) and is like the normal look of Piccolo but when he opens his dresswear, it looks like a giant`s head and a body longer than a 55 M Road.

He first used this form when he fused with Tail in the Frieza Saga in order to stop Frieza and also save Tail to prevent him from dying. When fighting Frieza, he was energetic and 5 times stronger than his average power level and kept Frieza distracted a long time from transforming to his ultimate form.

Next he used this form in the last Android Sagas and Imperfect Cell Saga, after fusing with Kami to defeat the Androids, he finds Cell in his Imperfect Form and transforms into a Super Namekian. After their battle wages on, he uses this form once again to stop Android 17 to come to Cell or otherwise he`ll get absorbed. But however as Cell absorbed most of his powers and 17 damaging him a lot, he couldn`t transform into a Super Namek during the Cell Games and really messed up.

While transforming, he gets large and then minimizes due to the fact that he is collecting all the powers of a Giant Form of a Namek.

After a lot of years of training, Piccolo finally achieved unlocking the Super Namek Form by himself. He sometimes uses it on Hell for training for fighting against devils and everyday villians like Freeza, Cell, Buu, Cooler and King Vegeta as his training part who come to disrupt his training.

He lastly used this form at the Xicor Saga. Due to the fact that Xicor was reckless, Piccolo and Vegeta joined forces to keep Xicor distracted and wait for Son Goku to return from the World of Eternal Dragons. He sees that Xicor was a much more powerful being. So angered, he takes out all the powers of his brainwaves and performs a Mantra ( I ain`t a Buddhist, I am a Muslim, duh? Americans like me don`t think it offensive!) and creates the ultimate Super Namek form of Piccolo with 100% energy at his sides and endless energy.

and it was slightly even impossible for Goku to control it even training in the World of the Eternal Dragons. Piccolo died and then from the 3 gods of the world, Bardock ( super saiyan god), Bills ( god of destruction) and Whis ( mentor of God) gives the power of them to Piccolo so that Piccolo could be sent to Earth using the power of 50X Instaneous Transmission.

Retrieved from "https://dragonballfanon.fandom.com/wiki/Super_Namekian_Piccolo?oldid=328191"
Community content is available under CC-BY-SA unless otherwise noted.