This story's theme is Happy Colored Marbles by Ween.

The river ran from swerve of shore to bend of bay. It was a source of sustenance and well-being for many different peoples, gracing each civilization it passed with new livelihood. This was, by no means, unique to this river - since the dawn of mankind, rivers had provided civilizations with water.

Alas, it had so happened that Piccolo, the revered Namekian himself, had started to use this river as his sole means of nutrition. As but a humble Namekian, he needed naught but water to sustain himself, and he found that this river suited his needs rather well. In between bouts of meditation and training, Piccolo would turn to the river to feed himself.

And it was so for many, many days, and perhaps many years. Until one day, lest his life continue uninterrupted and peaceful, Piccolo found that the water in the river had grown murky. He gave this little thought at first, and continued to drink from it. With each successive day, however, Piccolo found that the water grew just a bit dirtier, and just a bit browner. Soon it came to his attention that it might not be safe to drink from, but he chose not to leave his location. Many days passed before Piccolo concluded that the water was, simply, unsanitary. It seemed to sting his mouth, he decided, and he could drink it no more.

As such, Piccolo elected to find the source of this pollution and to put a stop to it. He knew full well that it would have been easier to simply relocate and to find a river that was clear and clean, but a part of him yearned to go into town, to create a more permanent solution.

So he traced the river for miles and miles, until he eventually found a town off to the side of the river, within which Piccolo saw a large factory. Large plumes of smoke ascended from the factory up into the skies above, seemingly forming new clouds. Off the side of the factory there was a pipe (an incomplete one, no less) that was depositing some form of waste into the river next to it. Piccolo, ever the brilliant man, deduced that this was the origin of the pollution, and he resolved to put a stop to it.

Piccolo entered the town. He concluded thereafter that ‘town’ might not have been the proper moniker for the civilization - perhaps ‘city’ might have been more accurate, for the bustling townsfolk and the numerous businesses lining the roads did not exactly denote a town.

There was something eerie, however, about the city. As Piccolo entered, the noise seemed to dwindle down, until ultimately the entire city was almost consumed by an overhang of silence. Piccolo did not quite understand it, himself. His presence evoked a disturbance, so to speak, wherein the variety of people retreated into the various surrounding buildings, seeking refuge. His presence, in and of itself, had forced these people into hiding, for they knew not what to expect from him.

Piccolo did not allow this to bother him. He entered the factory, only to be overcome with the stench of sweat and smoke. After a moment or two of searching, Piccolo came across the processing section of the factory. He noted that it was still pre-industrial - the factory was devoid of the capsules and advanced technology that marked the remainder of the world.

Piccolo glanced around the segment of the factory; a plethora of workers buzzed about, working on this or that. Among them stood one mustachioed man, a cigar in mouth and a whip in hand. He was the taskmaster here; that much was obvious. Piccolo decided that he was either the owner of the establishment, or that he could at least arrange a meeting between Piccolo and the owner. As such, Piccolo approached him, and prepared to initiate conversation.

He only prepared though, for the businessman initiated the conversation for him. “What do you want?” he spat, blowing cigar smoke in Piccolo’s face.

Piccolo waved the smoke out of his face, unamused, and began. “You need to stop polluting the rive-”

“Get outta here!” the businessman continued. “What are ya, one o’ those environment freak groups? Did they hire a shapeshifter to scare us? What are ya even supposed to look like?”

Piccolo had had enough. He could handle many things, but mockery was not one of them. He swatted the cigar out of the man’s mouth and caught it, before smashing the burning end against the forehead of the businessman. He twisted it around, leaving a permanent burn mark on the man’s forehead. The man, clutching his head, went falling onto the ground.

Silence once again surrounded Piccolo as he left the man lying on the ground. He went walking away and discovered the machine that was generating all the smoke and all the pollutants. It was a large, steel contraption, one that was practically hot to the touch. It produced new items at a rapid rate, dispelling more smoke with each new item. Piccolo conjured forth a great ball of ki and unleashed it upon the machine, damaging it irreparably. He then conjured up several more, destroying every piece of machinery in the entire factory until nothing was left but the screaming workers.

Piccolo’s work here was done. He stepped out of the factory through one of the holes that he had just created and left the city.

By nightfall, Piccolo had reached another town by tracing the river in the opposite direction. This town was considerably more appropriately named, but Piccolo contemplated whether or not it would be more accurately described as a village. He entered the town by swinging open a gate, and then he walked into the square of the town.

The wind blew calmy in the background and the roads were paved with gravel. As Piccolo entered, a boy on a bicycle rode past him, essentially ignoring Piccolo as he went by. The boy, however, was unique in this - as he walked through the town, the first person he came across was a young woman, who was knitting outside of her house.

Once she saw Piccolo, her mouth went agape - she had never seen a monster like him before. She scurried inside the house, slamming the door behind her as she went. Piccolo heard her click the locks behind her as she went, a reaction he found amusing. Figuring that there was no better source of information, he knocked on the door.

Slowly, she slid the peephole on the door open. Her disbelieving eyes looked out onto Piccolo, scanning him up and down.

“Wha-what do you want?” Her voice was high-pitched and squeaky, although Piccolo was unsure whether this squeakiness was inherent to the girl or caused by her fear.

Piccolo realized that he had to approach this with care and with ease, so as to not frighten the girl anymore. “Calm down. I just need to know where the chief is,” he growled back, his voice rumbling as it always did.

“What do you need with him!?” she shrieked back, clearly terrified.

“It doesn’t matter. Just tell me.”

The chief’s house was a grand one, lined with a number of different artifacts. A number of different valuables could be found streaming across the walls, including innumerable paintings and jewels. The chief himself sat in a grand chair that likely doubled as a bed, for it did not appear that he moved often. Indeed, he was an overweight man. He was also notably old, grey hair sitting on his scalp and defining his chin. Atop the chief’s chair were six, bright red rubies, each one situated next to the other.

Standing to the side of the chief was a man who was substantially younger and fitter. He held in his hands a rifle, one that would classify as almost pornographic for the average gun-lover. The man wore a vest that was decorated by a number of different items, ranging from gold to magnificent pins. He was, indisputably, a warrior.

The air in the tent was tense as Piccolo entered. The man hastily cocked his gun, as a look of fear crossed the chief’s face. He immediately pointed it at Piccolo, aiming precisely and cleanly. He could easily get off six or seven good shots before Piccolo could even speak a word.

Piccolo looked around. He then decided that it was time to begin. He got out one word: “I-”

The warrior that stood at the chief’s side was shocked by this word, and he foolheartedly began firing away. The shells were fired out of the rifle at unbelievable speeds, piercing Piccolo. The sound of the rifle replaced the tension in the air, filling it with the sound of war. It filled the air for several minutes, as the man continued to fire away at Piccolo.

He then stopped, having not affected Piccolo whatsoever. The bullets that had pierced Piccolo’s skin fell out, one by one, and eventually hit the floor beneath him. He was wholly unharmed.

The chief was alarmed. He was the first to speak: “What do you want? Riches? We can give you all the gold we have! Please, just leave!”

Piccolo stood there solemnly, and then spoke at last. “I just wanted to tell you that the river here was polluted.” He finished his declaration, and then he left the chief’s tent and retreated from the village.

Mankind sics itself relentlessly onto the unknown, and now it had sicced itself upon Piccolo. He had nowhere left to go but back to meditation. 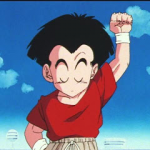