Shogun Tatsumaki is a character in Dragon Ball Omega; at first he's the primary antagonst/anti-hero, but he later becomes an occasional ally.  He's first seen during the 30th World Martial Arts Tournament; he fights Vegeta towards the end of the tournament and defeats him, and then fights Goku in the final round, and defeats him as well.  After that, Goku requests that he takes him on as his as his martial arts teacher, which he accepts.  He comes from Planet Shogun, a planet that exists in the Lightblade Solar System, a Solar System which exists in the Solar Wave Galaxy, a galaxy which exists in Universe 12.  In his youth, he was in trianing to become the God of Destruction of Universe 12, making him, Beerus, Champa, and Top the only non-divine beings who were to become Destruction Gods.  His primary martial arts teacher was Heles, the God of Destruction of Universe 2, whom he also had a romance with, which had to be kept secret because it's considered a sin according to the Omni-King for Divine and non-divine beings to have those kinds of relationships with one another.  However, long before his training was complete he disappeared.  For decades it was unknown where he went, but he really traveled to Universe 7, for unknown reasons, where he arrived on Planet Earth, and opened up a martial arts dojo on Komugi Island.  Shogun Tatsumaki is from a mortal race who are considered the predacessors of human beings.  They once existed on earth millions of years before current humans, but most of them left eons ago and evolved far passed the humans that they left behind.  Shogun Tatsumaki is considered one of the greatest martial artists of all time; in Universe 12 he was number 3, the only ones surpassing him being the Supreme Kai and the God of Destruction, and in Universe 7 that seems to be the same.  He possesses some ancient martial arts that no modern humans are able to perform, but were common back when his people lived on Earth.  On his home planet, and at his dojo, he's known as the Great Sage Fist, and is the leader of an organization known as the 12 Deadly Fists, which are 12 master martial artists, excluding himself, who take up jobs for money to help other people all around the world. 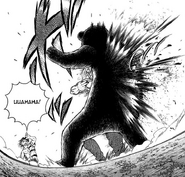 Even Goten and Trunks together can't keep up with his incredible speed... 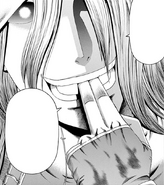 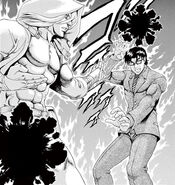 Gohan trying and failing to defeat him... 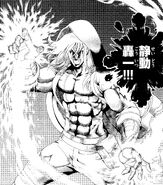 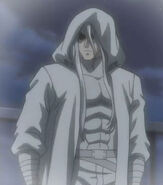 Add a photo to this gallery
Retrieved from "https://dragonballfanon.fandom.com/wiki/Shogun_Tatsumaki?oldid=385800"
Community content is available under CC-BY-SA unless otherwise noted.