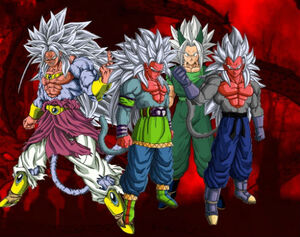 This form can be accessed by absorbing the powers of a ultra instinct, activating them and then transforming into a Super Saiyan 4, or through vigorous ki control by absorbing a spirt bomb with godly ki as a SSJ 4 and then obtaining that Godly ki for oneself, as seen with Goku in the Super anime. This form exceedingly surpasses all of its predecessor.[5][6]

A Mastered Ultra Instinct 4's hair grows to the length of a Super Saiyan 3's hair, except white. The fur on their chest also turns white as well. Other than this and a white aura, it looks like a white haired Super Saiyan 3 Super Saiyan 4. Their muscles are also really large, too.

Saiyan Physiology: When Goku was the Master of Ultra Instinct 4, he was the living embodiment of the Saiyan Race, making him one of the most powerful beings in existence.[2] When using his Spirit Bomb in this form it's enough might to destroy entire planets[5] and was universally known as the Saiyan-God[4] [14] before separating from the it after killing Frieza.

In this state, Goku's power massively increases to godly levels far exceeding the Gods of Destruction, making him the strongest he has ever been in history,[2] ranking as among the most powerful entities in the multiverse.[5]

The intensity of Ultra Instinct Goku's power was so great that his shirt was completely shredded when activated. In addition to this form's vast levels of power, it retains its unique effect on Goku's Saiyan Power ability, allowing his speed, power, general efficiency, and ki to increase as he continues to fight an equally or even more powerful opponent, but to a significant degree. Its most notable trait is that it grants Goku complete mastery over Ultra Instinct, making all of his moves automatic and able to both defend and counterattack with ease without being hindered by the thoughts that previously made Goku's use of Ultra Instinct imperfect. It was not until Goku let go of all of his doubts and live in the moment to fully understand Whis' teachings; thus allowing him to access the full potential of his fighting ability. Despite being a form of acts on neutral impulse, it can still channel his rage to amplify its power to staggering new levels, as shown when Goku's initial stalemate against the limit-breaking Jirenbecame a crushing assault that quickly pummeled Jiren into submission after Goku's fury at Jiren's shameless attack of the spectators. He also displayed such vast Ki control that he could calmly repel and contain any energy assault thrown at him.

In spite of the form's incredible levels of power, it has its faults. Similar to the reckless over-usage of Kaio-ken, the user can only sustain the sheer power of the form for a minute or so before their body breaks down from pushing so far beyond their natural limits. The time limit ending is shown from blood rupturing from the user's body as well as dark ki electrical shocks that will cause them severe pain and eventually force them into unconsciousness. In more severe cases, Whis noted it could potentially kill the user. It has also been strongly implied in Xenoverse 2 and Super, via comments made by Whis, that the drawback of this form is the high cost of stamina. This is similar with the Ultra Instinct -Sign- form, whereafter Goku had reverted to his base form, he was depleted of his energy to the point of severe fatigue, struggled to move, and clutched at his chest after defeating Kefla.

Moreover, Goku apparently attained Ultra Instinct purely by accident, as when he was confronted by Vegeta about not using it during their rematch in Gizard Wasteland, Goku replied that he is unable to tap into its power at will, meaning that the form can only appear if Goku is in extreme danger. This is supported by the encounter of Ultra Instinct in Xenoverse 2, where the Future Warrior battled Goku, who only managed to unleash the form after being under extreme stress from his opponent's attacks.