Lee'sa was born in Age 725, and like many other saiyans during that time, she was born a slave under the Tuffles . Unlike all the saiyans, she was the only one to stand out with her green hair and violet eye color. When she was 9 years old, her slaver master sent her for experimentation to Raichī. However, she was liberated by the Rebellion led by Hanasia. Hanasia took Lee'sa under her wing. She raised her and trained her to become powerful. Lee'sa quickly proved her worth and power and rose to the rank of General. She led the newly formed Saiyan Imperium and forced the Tuffles back to their home planet Plant. She also help defeat the Tuffle weapon, Project HYK-01X and witness Hanasia transform into a Super Saiyan. She also noticed a change in Hanasia personality, but ignored it and continued to follow her. She supported the decision of Hanasia, (who is now queen) to join the Planet Trade Organization. However, Lee'sa began to question her queens leadership after the Plorean Incident. Despite this doubt, she continued her loyalty to Hanasia. 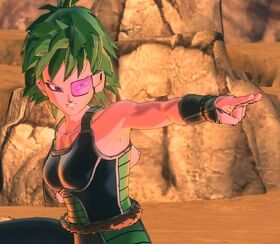 In Age 743, reports on how two low class Saiyans who were sent to exterminate all life for it to be sold on the market, had to retreat from a planet called Earth. In Age 744, Lee'sa decided to sent 6 elite saiyans to get the job done, but Hanasia has her form a invasion force and to be on stand by as the 6 saiyans go to Earth. Lee'sa listened in via Scouter to the battle that Saiyans had and becomes interested when a certain Human named Mercury was able to single handily defeats and captures them. She also learned of the Star Team and the Earth Defense Fighters. She then has the invasion force set course for Earth.

In Age 747, The invasion arrives in the Sol System, but suffers major causality but the E.D.F Systems defense net. However they blew through the net and landed on the Southeast hemisphere with multiple Saiyan pods scattered and nearby areas and cities. The met resistance against the E.D.F forces stationed in the areas. Lee'sa order her force to capture the cities and inhabitants in them. As the days turned into weeks, the invasion were slowly advancing and pushing the Humans back. Lee'sa wanted to break the morale of the Humans and have them surrender unconditionally. She targeted New Fork City for it was the largest and most densely populated city on the planet. She also knew that it will be a full moon in 5 days. Plans were made to attack the city, as well as other location that will be under the full moon.

Battle of New Fork City and the disastrous Operation: WinbackEdit

5 days have pass and the attack began, 8 great apes were sent to New fork and they were met with heavy resistance. Unknown to Lee'sa the Humans have developed a way dampen the energy that transformed the Saiyans into great apes. The attack was a failure. The humans also use the weapon all over the globe. Now all Saiyans are unable to transform by the Moon and artificial moons. Lee'sa began to respect the humans tenacity and resolve to fight for their planet. Lee'sa figured that the humans would counter attack, and they did. Thinking ahead of time Lee'sa was prepared and was surprised by the lack of strategy of the Humans during their attack on her ship. The came great numbers, but it was in vain. She wonder if this Mercury was behind the attack, but doubted. She has notice a lack in morale to both sides, and that her force wanted to end the battle just as much as the humans did. What was suppose to be a easy mission turned unproductive. So, she came up with a idea to decide the fate of Earth and a opportunity to face Mercury. She flew to the main headquarters of the Earth Defense Fighters. There she finally comes in contact with Mercury. She challenges the strongest, does not matter how many to fight her. If Saiyans win by death or is incapacitated, Humans will surrender the planet unconditionally. If humans win, Saiyans will leave the planet. Mercury accepts. Lee'sa warns him that they have 1 week to prepare, if they do not come by then, she will destroy the planet. Lee'sa also wanted to test the humans resolve again. She told them that they have to fight and get to her.

During that week, Lee'sa knew that Mercury will come up with a plan of attack, so she prepare her force for the attack. Lee'sa was right that Mercury had a hand in the attack, but she was more impressed that he manage to get the whole world in the attack. After a week had passed, the Earth Defense Fighters alongside all world military forces threw everything they had the Saiyan invasion force. This was enough to distract the main saiyan force for the Star Team airdrop and begin their assault and fight their way to Lee'sa herself. Lee'sa is greatly impressed when Mercury and Jac reached her. As promised, she battles the two humans. They both proved to be a challenge especially with the kaioken. Jac managed to grab her tail and temporarily disables her. She was vulnerable. The humans could end it right there, but to her shock, Mercury orders Jac to release her for he wants a fair fight. It was at this point, Lee'sa begins to admires Mercury as a honorable person. The fight continues and she injures Jac leaving just her and Mercury. Unknown to her, Jac had gathered power and transferred it to Mercury. They both fought hard against each other, but in the end Lee'sa was stronger. tired and wound she was about to give Mercury a warriors end, when suddenly Mercury uses his final attack; Kaioken Sprit Bomb on her. The blast was enough to make Lee'sa forfeit. However she felt no shame in doing that for she grew an interest in Mercury. She order an ceasefire and release all the human prisoners that were capture during the first operation winback. After Star Team recovered Mercury and Jac, Lee'sa orders all Saiyans to retreat and they left Earth.

Retrieved from "https://dragonballfanon.fandom.com/wiki/Lee%27sa/History?oldid=396754"
Community content is available under CC-BY-SA unless otherwise noted.