Lakota Chun-Son is the first son of Son Gojie and Derek Chun, older brother of Goki and Gabriel, only grandson of Son Goku and Chi Chi, and the later husband of Mia and father of Kory and Cloey.

Lakota is a lazy, unorganized young man. He is very content on letting others save the world, though he will step up if push comes to shove. He will not go out of his way to help others. He's a very Point A to B person, and will always be so. He is a very big procrastinator, and his teachers often scratch their heads at how smart he is, but his laziness. Lakota is also patient, and thinks he has all the time in the world to get things done.

As well as being a lazy, smart procrastinator, Lakota is an appreciative young man. His father, Derek, was a soldier in the Ameri army, and his mother raised him by herself for four long years, and he is very proctective of his mother.

Lakota is very close to his grandmother, Chi Chi, and his mother. He often teases his little sister, Goki, mainly because she is spoiled by their parents and he's a little jealous. When Goku offered to train Lakota with Uub at the end of Dragon Ball Z (he was eight years old), he declined after realizing how much work he'd have to do.

He doesn't like Trunks Briefs very much, because Trunks and his younger sister Panties are very arrogant like Vegeta. His uncle, Goten, often teases him and messes with his hair, which Lakota finds very uncool.

Lakota becomes a Super Saiyan at the age of eight years old, due to the built up anger when he thinks his parents are seperating. He can become a Super Saiyan 2, but it is a false transformation, as his eyes have pupils and his hair has a black tint to it. He cannot become a SSJ3 or higher because of his bloodline.

He can become an Oozaru when he has his tail, but cannot control himself when it happens.

-The other artist, Carebears665, is my best friend and she created Lakota's little sister and father

-I am currently developing a small manga for him, for my own version of GT.

-YOU ARE NOT ALLOWED TO USE ANY OF THESE IMAGES!!!!!

Lakota as a baby with his mother Gojie

4 yr old Lakota and his mother at her wedding 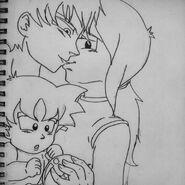 Baby Lakota and his parents

Lil Lakota
Add a photo to this gallery
Retrieved from "https://dragonballfanon.fandom.com/wiki/Lakota_Chun-Son?oldid=332393"
Community content is available under CC-BY-SA unless otherwise noted.