Dragonball Fanon Wiki
Register
Don't have an account?
Sign In
Advertisement
in: Alternate, Male Characters, Characters who can fly, Characters with ki

Khal, born Shallot, is a amnesiac ancient Saiyan where he originally lived during the Saiyan's earlier history.

Khal is a young man of average height with a slightly tanned complexion, dark colored eyes and spiky black hair that has a single bang hanging over to the right. He has a well-built physique and muscular build with broad shoulders, strong arms and biceps. As a Saiyan, his most noticeable trait is the long and prehensile black furred tail as opposed to the typical brown color that modern Saiyans have. Khal is also considered to be very handsome.

When Khal first arrived on earth, he wore a set of ancient blue Saiyan armor. This consists of a chest piece with shoulder straps extending from it, a pair of vambraces that go from elbow to wrist, three pieces of padding on his waist that covers his groin and hips, greaves and blue boots with silver toes. Due to its destroyed state, the armor would be taken by Bulma and Khal was given a more modern outfit with a black and white letterman-like jacket with the Capsule Corporation logo over the left chest, a blue tank top with a similar position logo, blue jeans with a brown belt, and black and white sneakers. It wasn't up until 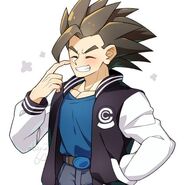 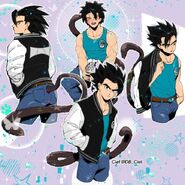 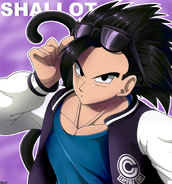 As stated by several others, Khal is regarded as incredibly powerful and has proven numerous times that he is undoubtedly one of the most strongest beings in the multiverse, standing well-among the top warriors in Universe 14.

Able to power up through rage, 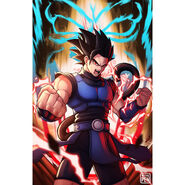 Due to his Saiyan genes, Khal is able to transform into a Super Saiyan that causes his hair to turn gold and spike upwards with his bang lifting upwards slightly. His eyebrows and tail change a similar color while his eye turn greenish-blue. 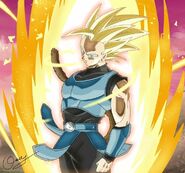 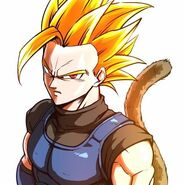 Having attained the form ***, Khal's appearance as a Super Saiyan 2 changes slightly with his hair becoming much more rigid and stands up more while his muscle mass increases slightly and is more defined. His aura is also larger and vibrant with blue electricity commonly covering his body. 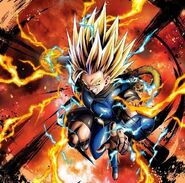 His Super Saiyan 3 form differs from that of his previous forms with his hair being much more longer as it reaches down to his waist and his eyebrows are completely gone to reveal a pronounced and rigid brow. 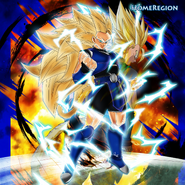 Due to both having a tail and being able to transform into a Super Saiyan, Khal is able to transform into a Golden Great Ape after he has absorbed enough Blutz Waves which he did during his fight with ****. In this form, he is much larger than the regular Great Ape while having golden fur as opposed to brown. A unique characteristic to Khal is that his posture is more upright like that of an human instead of hunched over and the fur on top of his head stands up similar to a Super Saiyan.

By gaining conscious over his Golden Ape form, Khal was able to achieve Super Saiyan 4. This form, like his Golden Great Ape form, differs from previous transformations as his hair retains it's black coloration instead of turning gold though it becomes spiker and longer to reach mid-back similar to Super Saiyan 3. The majority of his body also gains the characteristic crimson fur that is often associated with the Super Saiyan 4 form with similarly colored shadow trim around his eyes and his irises turn gold. 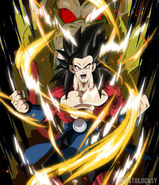 In this state, his muscle mass becomes slightly reduced, both his hair and tail turns magenta-red while turning crimson when powering up, his eyes have visible black pupils with red irises and he gains a fiery aura that has a crimson outside with a orange inner surrounding him. 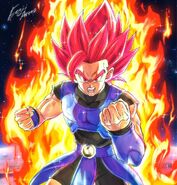 Upon transforming into a Super Saiyan 5, Khal's muscles grow bigger with his hair becoming silver and lengthening to the same degree as Super Saiyan 3, his irises turn red and the fur covering his body and tail turns a darker silver.

The fusion between Khal and Haruko.