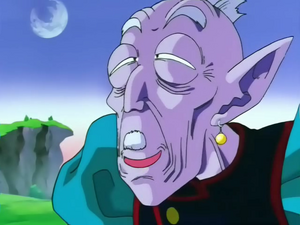 Kais are a powerful race of seemingly immortal gods. They live in Heaven.

They can be any color, but usually purple or blue. Other than that, they have weird hair and are humanoid.

Old Kai is a very old Kai. He lives on the Supreme Kai Planet.

Kabitokai is a fusion of The Supreme Kai and Kabito.

Jeice is a half-Kai, half-Demon who was exiled from Heaven and plotted to destroy it.