Jozarto is a secondary protagonist who trains closely with Vegeta, his best friend. He is a full blood saiyan. He takes his place as Vegeta's comrade, including Nappa and Raditz. His father died in the explosion and Jozarto will stop at nothing to avenge his death. He's not as mean as Vegeta but still has a killer instinct. He has the ability to go super saiyan 1, 2, 3, and 4, including ascended super saiyan. He first reached super saiyan when seeing Vegeta get killed by Frieza, but Frieza killed him as soon as he completed transformation. In the Cell Saga, Jozarto fights against the androids but doesn't really do a lot. He plays a major part in the majin saga up until the ending of buu saga by backing Goku and Vegeta up and doing major battles. He assists in the ending by giving ALL of his energy and passes out. In every fight he is in, Jozarto beats his opponents down easily.

Jozarto arrives shortly after the battle between Goku and Vegeta. He recognizes Goku as Kakarot and helps him up. Krillin doesn't buy it and tries to defend Goku from him and Jozarto explains that he is here to help and joins the Z- Fighters.

Jozarto hunts down Vegeta and the dragonballs so he can wish for immortality for himself and Vegeta... He and Vegeta join up and steal the dragonballs. When Frieza arrives he fights him in final form as best he can. At Vegeta's death, Jozarto's rage breaks and he starts transforming into a super saiyan. Frieza death beams him through the heart and Jozarto falls back, dead before becoming a super saiyan. He is later on revived by the dragonballs. 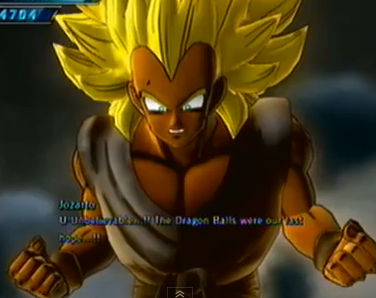 Retrieved from "https://dragonballfanon.fandom.com/wiki/Jozarto?oldid=331703"
Community content is available under CC-BY-SA unless otherwise noted.