He is considered one of the most powerful mortal warriors in Universe 7 in his prime years, being taught by many powerful beings such as Whis and Grand Kai. His fighting style is based off of the teachings of his master through his teenage years, Master Yakitori.

Jodenku was born on Planet Kemori in Age 778 in the Yasatane Tribe, consisting of Saiyans who escaped the destruction of Planet Vegeta, as well as the native Kemorian race. Planet Kemori is mostly tropical wildlife with many strange big animals for the Saiyans to hunt. Jodenku lived with his parents Scallio and Okara and usually spent his time either training with the other Saiyans and beasts or hunting for the tribe.

His father Scallio was the chief of the tribe, making Jodenku the prince. He was born with a power level of 160 and by the age of 6, he was already as strong as his father. Most of his strength at a young age was from his exponential potential, but he trained often by hunting giant beasts on the planet, such as bears and snakes.

While Jodenku was hunting a giant bear in 789, a bunch of ships landed on Planet Kemori. Saiyan soldiers came out and began gathering all of the members of the tribe and forced them onto the ship, where they were brought to Planet Frost, a planet that looks similar to Earth except the sky is much more blue and it is colder. The tribe were then either killed if they were too weak, or forced to become a soldier for King Jagaimo (a Saiyan king in charge of the Saiyan warriors of Frigid's empire), and Jodenku's mother was killed. Jodenku and the Yasatane tribe were under King Jagaimo's rule for 2 years and Jagaimo was under the rule of Frigid's Empire, which was starting to rise up drastically.

During his time in Jagaimo's squadron, Jodenku was given new armor and was trained by the elite soldiers of the squadron. After a few weeks, they noticed his bizarre potential and they decided to examine him. Dr. Pirasu was a scientist in Frigid's Empire and was assigned to examine Jodenku, which he did. They found out he was a long descendant of Yamoshi, the first Super Saiyan God, and was somehow born with extreme potential even though the chances of inheriting it from Yamoshi were extremely low. Jodenku was never told this, but Frigid and Dr. Pirasu are the only people that know about it.

Jodenku was forced to destroy planets and conquer more planets across the entirety of the North Galaxy for Frigid, and although he didn't like it, he had to do it for his survival. In 791, he became stronger than all of Frigid's henchmen at the time and was assigned to destroy all life on Planet Yardrat along with his father.

In late Age 791, Jodenku's parents were assigned a mission to conquer Planet Yardrat and massacre its population, while their son was being examined in a scientific laboratory to determine how to use his potential. His parents ended up refusing and beginning to rebel against the higher ranks of the Frigid Force. This resulted in them both being terminated on the ship while Jodenku witnessed it in his liquid chamber.

The soldiers that killed his parents went to go throw their bodies in the disposal when they suddenly heard a loud glass shattering sound from behind them. They turned around to see the entire liquid chamber room destroyed, with healing liquid flowing from underneath the doors. Jodenku was staring directly at them, with broken armor and blood all over him from the glass scraping him and abuse from the soldiers. Jodenku's power then suddenly exploded as the power of the ship malfunctioned for a few seconds as he transformed into a Super Saiyan for the first time in his life. He had no control over himself due to his pure anger and immediately lunged at the soldiers, killing them in one hit each.

Jodenku then made his way around the entire ship and went on a massacre, killing any soldier he saw. After a few minutes and over 100+ dead Frigid Force soldiers later, Jodenku located the pod room, where dozens of pods were contained for soldiers to exit the ship when they were deployed on a mission. He took a few minutes to calm himself down while hiding in the room and quickly hopped into a pod, clicking a random button before eventually passing out.

It turns out that the button he clicked directed him towards Planet Earth, which kept Jodenku in the pod for a few weeks before he eventually crash-landed in a bamboo forest. The aftermath of this can be found in Dragon Ball PR.

Jodenku's appearance as a child is very similar to Beat from Dragon Ball Heroes, with a similar hairstyle and height, as well as having a tanner complexion. After he becomes settled on Earth, he begins wearing a white and black gi without a kanji symbol due to not yet having a master. His appearance remains mostly the same until exiting the Hyperbolic Time Chamber in the Demon Rebellion Arc. Jodenku at this point has had a tail for his entire life.

As he begins aging faster as a result of training in the Hyperbolic Time Chamber, he immediately grows to be 5'6" (168cm). His voice also changes to a more pubescent voice, as his hair becomes even more wild before he cuts it shortly after exiting the HBTC so it could resemble the same hairstyle he had prior. He wears the same black and white gi, but often rolls his white undershirt sleeves up in a battle. In the ??? Arc at the age of 14, he grows an inch and other than that, his appearance is exactly the same.

Jodenku's appearance in the New Red Ribbon Arc at age 17 remains mostly the same, but he grows a few inches and now has a more kept hairstyle, similar to Ultimate Gohan in the Fusion Saga of the Majin Buu Arc of Dragon Ball Z. His gi is mostly the same except for now having a kanji in the corner of his over-shirt saying Light, and the sleeves of his undershirt are now shortened. His tail is also missing, indicating that he cut it off either to fit in more after enrolling in Orange Star High School or due to preference. Jodenku's voice is also fully matured at the beginning of this saga, and he is beginning to look more like a young adult instead of a teenager. During the New Red Ribbon Arc, he gets a scar on his cheek from his battle with Rybon. As an adult, Jodenku grows to his adult height of 5'11" (180cm) and uses the same gi color scheme that he has been wearing since his arrival on Earth, with an exception of now having a belt wrapped around his shoulder with a symbol of a dragon on it, and short undershirt sleeves. His hair is now a dark brown tint and slightly more spiky and wild than it was in the New Red Ribbon Arc, but is still quite well kept on the sides.

As a child, Jodenku is quite happy-go-lucky and is usually cheerful for whatever he is doing. As a teenager, he is slightly more quiet and loves to train, but also has a humorous side. As an adult, he is much more chill around his family and friends and it is hard to piss him off. (this section is a WIP) 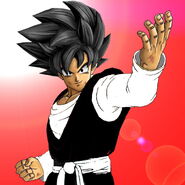 Adult Jodenku (Age 24)
Add a photo to this gallery
Retrieved from "https://dragonballfanon.fandom.com/wiki/Jodenku_(DBPR)?oldid=389834"
Community content is available under CC-BY-SA unless otherwise noted.