Infinite Zamasu is the final incarnation of Zamasu and antagonist of the Future Trunks Saga. During the anime and briefly after his resurrection in Fanga after his revival - Infinite Zamasu was the will of Future Zamasu left over while in both Manga and Fanga (he reformed into his physical form) - he takes on an appearance identical to Fused Zamasu.

While in his "Mortal" form; he wears an outfit identical to Zamasu's Kai outfit with the colour scheme of Fused Zamasu's outfit complete with the lack of Potara Earrings or a Time Ring. He often has a bland expression on his face as a result of losing his immortality.

Infinite Zamasu demonstrates the same ideals as his prior incarnates. While in his "Will" form - he displayed no sanity and constantly laughed while in his physical form - he showed great fear at Future Zeno's appearance, but maintained his smile laugh in the face of the Omni-King, even after the latter looks up at the sky when Goku tells him that the former was the one responsible for the destruction and desolate appearance of Earth.

In the anime and Manga - he was erased from existence by Future Zeno after destroying much of the Earth while in the anime he fused with reality while in the manga - he infinitely multiplied through regeneration as a result of his immortality.

However, he was revived by Goku Black: GT and had his immortality stripped off as a smaller variant of Zamasu deemed him unworthy it, but gave him a new form and clothes.

As a fusion of Future Zamasu and Goku Black, Infinite Zamasu possesses all the techniques and abilities of his fusion components and more:

Zamasu's will is Infinite Zamasu's only form in the anime and initially after his revival in the Dragon Ball Advanced. In this state; Infinite Zamasu is a mass of Zamasu faces.

Infinite Zamasu's initial form in the manga. As a result of Goku Black and Future Zamasu being the one and the same they refused to defused causing a grotesque version the two.

After his Grotesque form is cut in half, Goku Black and Future Zamasu briefly stood before further evolving into his Fused Zamasu appearance. 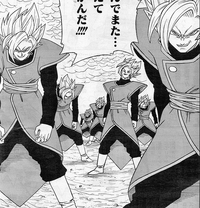 In a gag panel for the manga - one of the Fused Zamasu's took on Monaka appearance possibly due previously taking Monaka's body.

After being revived by Goku Black: GT - he lost his immortality and was given a new form and clothes as a result. Infinite Zamasu retained his Super Saiyan Rosé along with the Eternal Youth part of his immortality. As apart of his new form - he now has red irises, a red aura, and an increase in his muscle mass.

After learning of Xeno Trunks, Future Trunks, and Trunks: GT battling against Grand Tyrant (fusion of Baby 18 and Omega Shenron) in Floor 6 - Infinite Zamasu arrived to deal with the situation as the battle was threatening the barrier between Floor 5 and Floor 6. Infinite Zamasu should is capabilities by surpassing his limits and entering Super Saiyan God SS Evolution and destroy Grand Tyrant with a ki blast.

As a result of him lacking before Goku Black and Future Zamasu as well as due to him entering Super Saiyan God SS Evolution, Infinite Zamasu's body began to break down resulting in him taken on a Half-Corrupted form identical to Fused Zamasu's Half-Corrupted form in the Anime. By transferring blood into his body from Xeno Goku he was able to reduce his arm's size to its "normal" size taking a "partial-Corrupted state".

In an attempt to reverse his body breaking down; Infinite Zamasu kidnaps Xeno Goku and transfer his blood into his own body and manages to reverse most of the damage to his right arm and face.

His right eye and ear are still corrupted as his right arm, but his arm was reduced to its normal size.

At some point following the 2nd Timespace Rift Tournament Saga - Infinite Zamasu will attempt to use Xeno-Evolution and Dark Evolution to reverse his body's Half-Corrupted state only to take on the "ugly" Half-Corrupted form that Fusion Zamasu's did in the Anime; engorging his arm again.

Retrieved from "https://dragonballfanon.fandom.com/wiki/Infinite_Zamasu_(SSJJ)?oldid=391251"
Community content is available under CC-BY-SA unless otherwise noted.