Haimaru (ハイマル, Haimaru) is the eldest child of Cooler and the twin of Raimie. He was born not long before his father was killed, and he was, along with his sister Raimie, raised on Ipha, the moon of The Stomping Grounds. During the Planet Trade Organization civil war, he and his sister were targeted by rogue Faereth and assumed to have been killed when Ipha was destroyed, although it is later revealed that they both escaped with the help of Admiral Nectarian.

He is featured as a minor character in The History of the Decline and Fall of the Planet Trade Organization, and is one of the protagonists of Dragon Ball: Heart of the Dragon. 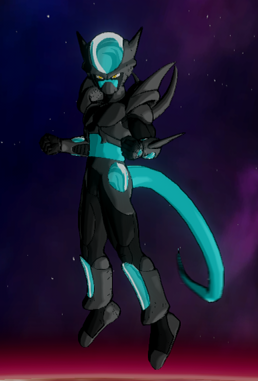 In this story, Somen the Yardrat accidentally stumbled upon a blood ritual involving Haimaru, Admiral Nectarian, and several Telnauki. In the blood ritual, Nectarian cut open Haimaru's forearm in order to summon Myaku the Time-Eater. Nectarian declared Haimaru the true emperor of the Planet Trade Organization and begged for Myaku to appear to bestow godly powers onto the boy. The summoning worked, and as Myaku began to drink the boy's blood off the floor where it had pooled, Somen screamed, alerting the congregation to his presence, thus forcing him to flee before he could witness the rest of the ritual.

Retrieved from "https://dragonballfanon.fandom.com/wiki/Haimaru?oldid=393223"
Community content is available under CC-BY-SA unless otherwise noted.