Goffy is a character in the story Androids that pass Doomsday Part-1. This is the fusion between Luffy and Goku, created in order to stop Android Straw Hat, the Android created by Professor Bazooka.

Goku and Luffy only fuse to defeat Android Straw Hat. First, Luffy had trouble fusing because it was his first time. Luffy was then attacked by the Android, but Luffy was able to fuse at the time when The Straw Hat was going to shoot him with a blast. Luffy's and Goku`s transformation had no side effects.

Goffy wears Luffy`s Straw Hat, but his hair is like Goku`s. His eyes are black like both of the heroes. His dress wear is similar to Gogeta`s. But there is a X cut on Goffy`s body like on Luffy`s. He wears half-torn jeans on the right side and full jeans on the left side. The pants are fitted and are like Gogeta`s. The shoes are yellow ochre-colored sandals. 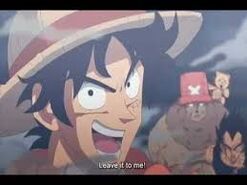 Goffy while talking to Vegeta, Chopper, and Kon 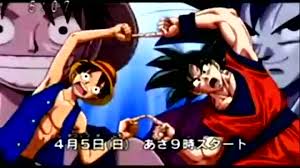 At the time when they were fusing 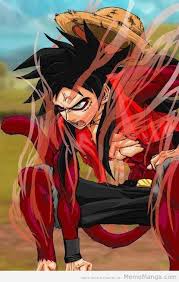 Luffy and Goku try to go to a higher level (Super Saiyan 4 and Gear Second) but the procedure fails even though Goku could become SSJ4
Add a photo to this gallery
Retrieved from "https://dragonballfanon.fandom.com/wiki/Goffy?oldid=332323"
Community content is available under CC-BY-SA unless otherwise noted.