Future Trunks is a character from the Dragon Ball Z series. After the Cell Saga, he went on to become a founding and leading member of the Time Patrol. He appears in Pan's Ascent.

Growing up in a world where Goku had died to the heart virus, the Z-Fighters were killed, and Androids 17 and 18 wrecked havoc on the remainder of humanity, Trunks sought to stop them from causing any further harm. He came across Gohan, the son of Goku, whom trained him, as well as saved Trunks' life at the cost of his left arm.

In spite of all his training, Trunks could never achieve the Super Saiyan transformation that his mentor possessed. Then, one day, as the Androids attacked Pepper Town and Trunks begged to come along and help Gohan fight them, he was knocked unconscious by his mentor. He later woke up to find the area covered in rain and eventually came across Gohan's dead body, having been slain by the Androids. Screaming into the night, the anguish at the loss finally caused him to finally attain the Super Saiyan form for the first time.

With his mother having finished work on a time machine, Trunks utilized it to travel 20 years in the past, prior to his own birth. During his first visit, he killed Mecha Frieza and King Cold before finally meeting Son Goku to warn him of the impending threat of the two Androids, as well as to give him medicine to overcome the heart virus that would take his life.

He returned three years later, finding that not only were the Androids 17 and 18 of this new timeline stronger than those of his future, but that he had inadvertently unleashed the bio-android Cell on their world. In spite of training in the Hyperbolic Time Chamber with Vegeta for a whole year, he witnessed Vegeta allowing Semi-Perfect Cell to absorb Android 18 and being too late to stop it from happening. From there, neither he nor his father could defeat Cell's newly acquired perfect form, whom spared them so they could compete in his tournament to determine the Earth's fate.

During the Cell Games, Trunks watched Goku and then the younger Gohan of this timeline face off against Cell, and faced Cell Jrs' alongside the other Z-Fighters. After seeing Gohan go Super Saiyan 2 and strike Cell with enough force to cause him to revert back to his previous Semi-Perfect form, he saw Cell about to self-destruct to destroy the planet, only for him to be stopped by Goku, whom used instant transmission to teleport the two away from the Earth. Believing Goku to have succeeded with his self-sacrifice to stop Cell, Trunks was caught completely off-guard and killed by a massive beam through his chest by Cell, whom had survived and teleported back to Earth.

Wished back to life by the Dragon Balls, Trunks left in his time machine back to his future, where he finally managed to destroy his world's Androids 17 and 18, then destroyed Cell in his weakest form before he could travel back in time.

Shortly after this, Trunks found himself confronted by a short pink-skinned woman named Chronoa, the Supreme Kai of Time. She expressed extreme displeasure in Trunks and his mother's actions of altering the timeline, causing untold problems, as well as Cell's presence in the past to begin with. Trunks realized what he had done wrong and accepted responsibility for it, but simply confessed that he and his mother were trying to prevent their future from having to be suffered by others.

Expecting Chronoa to undo everything he had done, he found instead that she was going to leave it be. Due to this being the first recorded use of a time machine and time alteration, as well as the damage having been done before she could intervene, Chronoa agreed that Trunks' alterations would remain as the new main timeline. However, knowing that Trunks had opened the door to others to attempt altering the past as well, some with nefarious purposes, Chronoa asked him to come with her to preserve history going forward.

Trunks, wanting to protect the possible peace of this new future and to atone for what he had done, accepted and over time, helped Chronoa in founding the Time Patrol as her assistant. He lived out his life in Toki Toki City, helping in training other warriors to combat threats to history itself.

During the Time Patrol's early days, Trunks and Chronoa invited a woman named Towa to join the team, whose scientific background aided in enhancing the city's technology. After Towa learned about the scrolls and that she could alter her past, Trunks was sent in to prevent the change to history. He regretted having her end up watching her most traumatic event a second time and even pleaded for Chronoa not to expel her from the Time Patrol.

But once Towa learned about Trunks' change to history and that he was allowed to keep it, she went rogue and Trunks found her attempting time and time again to alter the past to save her brother Dabura. Trunks knew whatever was left of their old friendship was gone and simply hardened his resolve to defend the history prior to his alteration and the new future he had created.

Some time later, Towa ceased her moves and, in spite of Trunks' vigilance, found no signs of her tampering for several years. Part of him hoped she had given up on the goal, but he remained prepared for her eventual return.

As time went on, Trunks realized the Time Patrol, as large as it was, was beginning to become spread thin to combat anomalies in time, and that a new threat was emerging. He gathered all seven of Toki Toki City's Dragon Balls to summon Shenron, asking for a strong ally who could help him defend time itself.

Shenron granted his wish and Trunks, initially greeting this glowing warrior, found a young woman who was covered in frost and barely alive. He called for help and kept her from hitting the ground, but was startled when her only word spoken to him before losing consciousness was "Trunks". When Chronoa came to him and asked why he was so shocked, he explained that he didn't recognize this woman, but she knew him, or at least just his name.

A few days later, after this young woman had recovered via a healing pod, Trunks introduced himself to her, explaining that, while he was born to Vegeta and Bulma, he was different from the Trunks she knew. She introduced herself as Pan, then as Trunks tried to help her cope with her new home in Toki Toki City, he came to realize her family and home had been taken from her by Frieza. Believing that it would hurt her to know that he had summoned her to Toki Toki City himself with a wish from the Dragon Balls, he explained that she was "found" and brought there.

When he explained the Time Patrol's role, he was asked by Pan if it was possible to be able to go back and stop Frieza from attacking her home to begin with. Trunks had to explain that such use of time travel wasn't allowed while keeping her from knowing that he had altered history himself.

Trunks went on to help Pan in joining the Time Patrol, introducing her to Commander Hale, and walked her through the first day at the academy, in which her abilities were gauged. When she ended up in the lowest rank, the 10s, Trunks encouraged her to keep trying by telling her he had initially began in the lowest ranks as well before reaching his position now.

During a sparring session with Pan, Trunks unleashed a Masenko, then saw Pan counter it with a Masenko of her own. He inquired where she learned it from, to which Pan revealed Piccolo taught her, as well as her father. He was then told that Pan was the daughter of Gohan, shocking him utterly. The two traded stories about their worlds, with Trunks revealing the Gohan of his world was his mentor, and hearing from Pan that in her world, Trunks was the president of Capsule Corp and had a younger sister named Bulla.

For the next few weeks, Trunks watched as Pan continued honing her skills at the academy, including sparring with her in prop sword fights. When Pan was being challenged to a battle by a fellow recruit named Amura, Trunks walked them to an arena, then had to take off for business with Chronoa.

When he returned, finding Pan later as it began raining, he greeted her, only to see her with a distraught face and running from him. He turned to Cloke, someone who was nearby the day he made the wish on the Dragon Balls, and realized she had learned the truth about how she arrived there. He followed Pan to try to explain why he didn't tell her, but was told off for keeping things from her and feeding her half-truths. In a brash moment, Trunk shouted that he was not only the reason Pan was alive, but, thanks to him altering history, he was the reason she was even born. Upon realizing what he had said, he couldn't speak any further as Pan exclaimed that the Trunks she knew was dead, like he should have left her.

Overcome with guilt from hurting Pan, Trunks walked across Toki Toki City in the rain for some time until Chronoa caught him and brought him back to the Time Nest. He came to realize he had failed to heed his allies' advice to tell Pan the truth sooner and believed that it was too late to repair what he had done, only for Chronoa to reassure him that everything would be alright.

He came to the Time Nest the next day, realizing that Pan had gone on her very first mission in repairing history. Upon Chronoa congratulating her and leaving, Trunks apologized for keeping the truth from her, accepting that he may not be forgiven if she believed it to be truly unforgivable. He found that Pan apologized as well for what she had said to him, but then she asked him to tell her the truth about everything moving forward, even if it would hurt her, which he accepted without hesitation. Before the two left, Trunks gave her a capsule containing a jacket and a cape, signifying Pan "joining the team" as a Time Patroller. 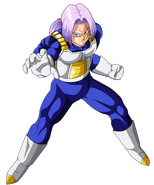 Trunks as he appeared in his battle against Perfect Cell
Add a photo to this gallery
Retrieved from "https://dragonballfanon.fandom.com/wiki/Future_Trunks_(Pan%27s_Ascent)?oldid=389734"
Community content is available under CC-BY-SA unless otherwise noted.