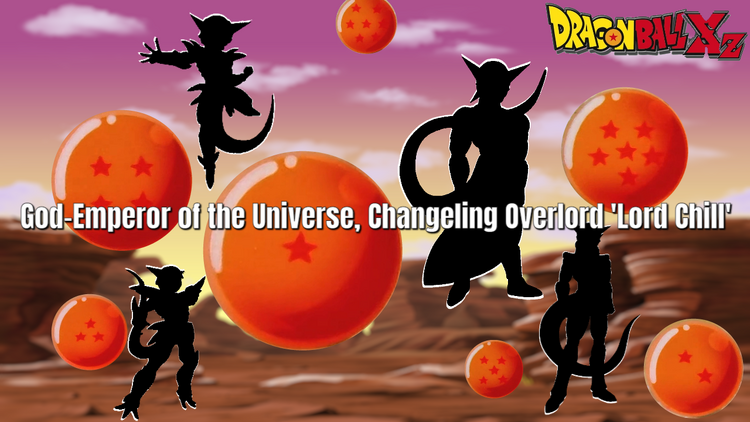 As the light fades, 3 more Changelings can be seen floating behind them, a white one with blue orbs and a green one with green orbs both standing silently behind a more sinister and imposing teal one. The teal Changeling glares down at the Saiyans, all 4 in their Super Saiyan forms.

"Galactic Emperors, report," the ominous Changeling barks an order at the four of them.

"Yes, Lord Chill," Arctic steps forward to respond. Everyone is shocked and terrified, except the Changelings. "Like Tundra's readings have estimated, we are many generations into the distant future. We have encountered a race of primitives from the Sadala Sector here in the Uncharted Sector. Likely rebels of the Changeling Universal Army that have taken up refuge here, seeing as these primitives have supposedly fought and killed two of Galactic Emperor Iced descendants."

A third Changeling suddenly appears, a floating head popping in from the side. The Saiyans are shocked until Gohan notices the shimmering effect around the third Changeling's neck stump. "Wait," Gohan whispers, "they are suppressing their powerlevels, they are using holograms to speak with us."

"Then what about the overwhelmingly oppressive power we all felt in the distance?" Goten asks.

"That must be the source of those holograms..." Vegeta says ominously before the camera snaps to Lord Chill's terrifying stare. "The one they call 'Lord Chill'."

The third Changeling is wearing a mask, covering his hornless face. Green orbs rest atop his blue-grey head. "So we really are tens of thousands of years into the future? Remarkable. Though how could such primitive creatures take out a Changeling? Our biology is impervious to all but the most extreme of exterminitory measures."

The green one with green orbs steps forward, shaking his head as he smirks, looking at the hornless Changeling. "Isn't it obvious, Tundra? They said it was Iced's decendants. Shouldn't that ansqwer everything? Clearly they are no match for you guys seeing how exhausted they look and how untouched you are."

Arctic nods, "Indeed, Captain Ice. It's a shame you share a similiar name to that sorry excuse of an Emperor." All of the Changelings burst into laughter, except Iced.

As well as Lord Chill and the final unnamed Changeling, "Silence!" Lord Chill barks, "Regardless of capabilities, I appointed every single one of you to your positions for a reason. Insult in Iced is an insult in my decisiuon making skills. Are you saying you defy my will?" He glares through the hologram at the 4 Galactic Emeperors who we4re previously giving the Saiyans a difficilt time. All 4 of them recoil in absolute fear, the three not Iced saying 'Yes God-Emperor of the Universe, Changeling Overlord, sir!'

The screen fades to black as the Saiyans stare slack jawed at the fear and power of Lord Chill, Vegeta looking into space towards the locaation of the distant but oppressive energy signature in resolute fear.