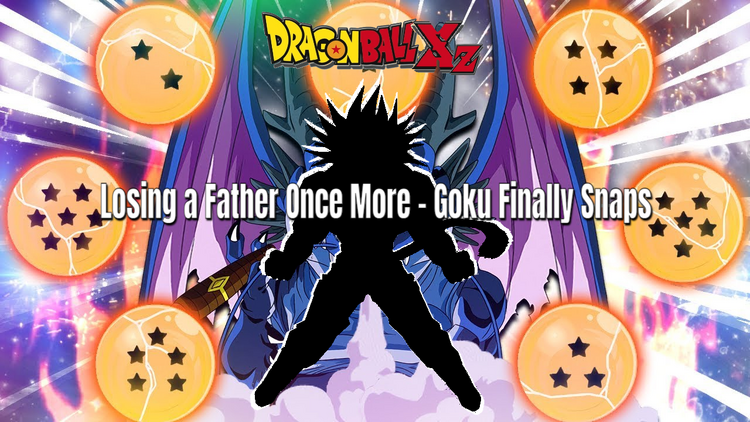 Goku and dark TRUNKS finally collide, their hands slamming into each other. They grab each others hands in a struggle before firing off their attacks.

They fire off their beams into each other at point blank range, causing a shockwave to erupt from them. Light shines from their hands as they struggle to keep their grips with the beams firing. Goku seems to be struggling. dark TRUNKS takes advantage of this and takes the upper hand.

"I got you now, Saiyan!" dark TRUNKS yells tauntingly. He shoves Goku back and continues firing the beams, knocking his hands back. He keeps firing the beams and brings them together into one, the two beams hitting Goku on each side before combining into one giant beam.

"AAAAAAAARG!" Goku yells in pain as he regains his balance. He looks ahead, but dark TRUNKS isn't there. "Where the fuck did he go?" He continues looking around and finds Gohan. Behind him is dark TRUNKS. "GOHAN! LOOK OUT!" he yells desperately.

Gohan turns around with a look of terror on his face. "Good night...for good," dark TRUNKS says with a sneer as he karate chops Gohan, slicing his head clean off. "HAHAHAHAHAH!"

"Gohan...GOHAN, NOOOOOOOOOOOO!" Goku screams as he flares off a huge white aura before launching himself at him. "You'll pay for that!" Goku charges a massive beam in his heads while yelling out "Kamehameha...x1000000!!!"

dark TRUNKS becomes worried for a second, quickly charging his Negative Big Bang Kamehameha Masenko. Goku fires it before he can get it fully charged, so he has to release it early, stopping it right in front of his face. He struggles immensely to hold it back but is failing. He then looks behind Goku and sees the last remaining person he cares for. He gets an evil idea. He releases a huge burst of energy, draining almost all of it. He falls out of Super Dark Saiyan 5 back into Super Dark Saiyan, but the shockwave deflects the Kamehameha x1000000 towards Goku, but it misses. He's not trying to hit Goku though as the beam goes straight for Bardock.

As the smoke clears, Goku becomes terrified. He ignores the fact that dark TRUNKS expended so much energy and flies towards Bardock. He noticed that he too is back in his base form. "No..." Goku says solemnly. He takes Bardock in his arms and begins to cry. Tears stream down his face as he holds him tightly. "B...Bardock...I just finally got to meet you...and he took you away from me...I...I can't lose another father again. You were already a spirit...dieing now means you'll be gone forever...you...you can't be dead, please. I already lost Grandpa Gohan, and I can't lose my father AGAAAAAAAAAAAAAAAAAAAAAAAAAAAAAAAIN!!!"

As he cries out in agony at his dead father. As Bardock's spirit begins to desolve, Goku continues to scream out. Energy begins to pour out of Goku at an alarming rate. The ground begins to crack around him as the planet quakes immensely. The very planet itself begins to break apart and drift into the air, the pressure from the energy pulverising it to dust and then nothingness before it gets too high. Goku's eyes begin to glow as his pupils and irises begin to fade away, leaving just the pure whites of his eyes.

dark TRUNKS begins to worry, he dreads what is about to come. He quickly begins to draw in excess energy from the outpour, hoping to be able to go back into Super Dark Saiyan 5 before Goku calms down. But he doesn't calm down. He continues to cry out, not once running out of air, as if his lungs are empty and he's just blasting pure energy through his voice box. Suddenly amoung the giant white aura, a beam of gold fires out of the top of his head. His hair at the top of his head begins to flash gold as well while the rest remains white. He lifts off the ground and into the air as Bardock completely finishes disolving. He begins charging energy even more as the beam becomes a massive cone errupting from the top of his head and into space.

dark TRUNKS finally flares into Super Dark Saiyan 5 as the golden cone gets so bright it blinds everything in the solar system with a blanket of gold. The light fades away to show Goku floating in the air, a massive white aura surrounding him with the top portion from his hair up an aura of gold instead. His massive hair has a huge chunk at the top of it colored gold instead of white like the rest of his hair and fur. His eyes are completely blanked out white as he growls. He suddenly turns his head to dark TRUNKS, a look of pure rage on his face as the screen freezes and zooms out to a highly detailed drawing of him staring down from the sky at a terrified dark TRUNKS.

Next time on Dragonball XZ