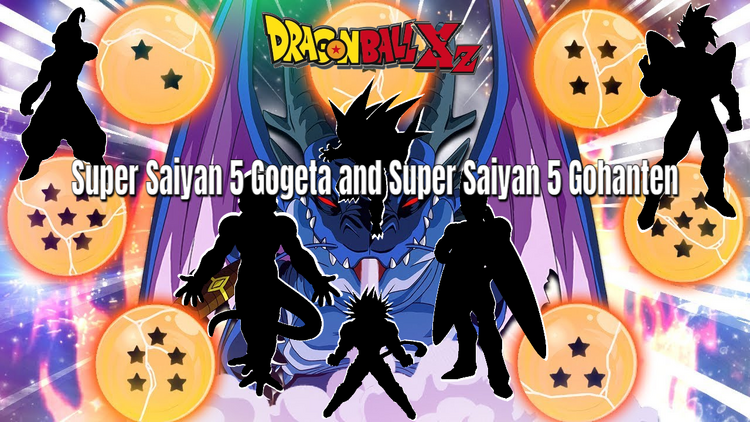 The two Kamehamehas fuse together into one, taking out all 5 attacks in an engulf of white light. It flies towards all 5 of them, engulfing them in it as well, their screams muffled by the loud roar of the beam. As soon as the light clears, the dark FIVE are shown tossed around the place, all dead from the attack. Bardock congratlates them on the display.

"Did you forget about me?" dark TRUNKS says with a chuckle. "I'm hurt. Really. How could one forget about perfect old me? It's a shame you took out my dark FIVE, but thanks to them, I know the extent of your power. You have no chance seeing as all of your surprises have been laid out to me."

With that, dark TRUNKS is engulfed in a purple enegery, turning pure black as he roars out, turning into Super Dark Saiyan 5. He takes no time gloating and immediately leaps towards Gohanten, giving him a swift uppercut, knocking him onto his back. Gogeta attempts to kick him in the head, but dark TRUNKS turns around and coutners it with a block followed by a punch to the gut.

"Kamehameha x100000!" Bardock yells as he hits dark TRUNKS point blank. The smoke clears as dark TRUNKS stnads there, only bruised and cut from the attack with no signs of true damage. "What the fuck? Impossible!"

"Not bad. You guys are pretty tough even for me in my Super Dark Saiyan 5. This might actually be a pretty fair fight, but just don't forget. I'm 10x more powerful than a meer Super Saiyan 5. You'd have to go Super Saiyan 6 to stop me, but we all know that sort of power is nothing more than fiction. You guys have no hope against me."

"We'll see about that," Gohanten says as he gets up.

"Let's get this started," Bardock says to finish it off.

The four of them engage in an epic fight, trading off Kamehameha x100000's and Negative Big Bang Kamehameha Masenkos as each one of them attempts to take out the other.

The episode ends with all 3 Saiyans charging a single Kamehameha together with their hands all joined for the attack. "Saiyan Family Kamehameha x10000000!" they all cry together before a burst of light causes the attack to end before it gets a chance to fire. The light fades the episode to white.