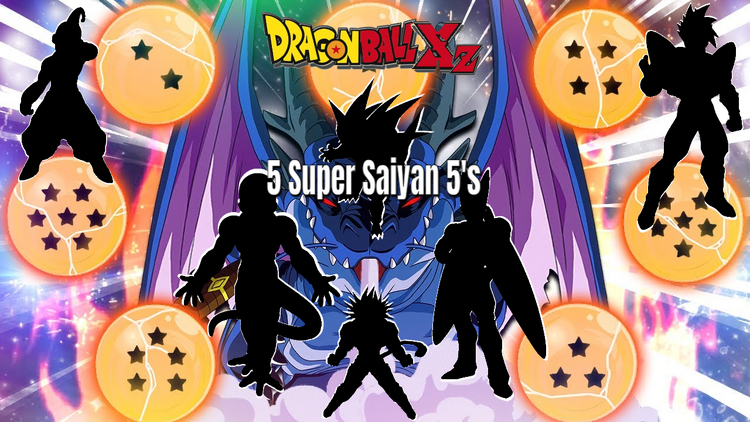 The 5 Super Saiyan 5's are revealed again like at the end of the previous episode. dark OMEGA SHENRON becomes terrified.

"What is this? How did you get so much power?" dark OMEGA SHENRON asks.

"We've been training," Goku says simply, all emoiton drained from his voice.

"One can't get this much power from just trianing. What is your secret?" dark OMEGA SHENRON asks. He charges towards Goku, fist pulled back. "It doesn't matter. No amount of training can take on the power of the dark FIVE!"

dark OMEGA SHENRON launches his fist towards Goky. He simply stops it with a finger, the force from dark OMEGA SHENRON's punch causing his first to break due to the absolute umovableness of Goku's finger.

dark TRUNKS smirks. Finally glad to see so much power to dark copyu. "Good, now that they are fighting at their full power, I can see what they are truely made of. The dark FIVE was made to take on the power of the Super Saiyan 5 directly. Now it's time to test them at their full potential as well."

Goku, Vegeta, Gohan, Goten, and Bardock all charge towards dark OMEGA SHENRON, dark BEBI, dark CELL, dark BUU, and dark FREEZA respectively, entering a massive classh. Each one throwing their most powerful attacks against each other. They are evenly matched, each one unable to take out the other no matter how hard they try.

Each one of the dark FIVE charges up their attacks, firing them at the 5 in an attempt to use their powers together to desroy them.

Goku and Vegeta look at each other and smirk as Gohan and Goten do the same. "Fusion-HA!" all four of them yell as a large burst of light appears, causing the episode to fade to white before ending.