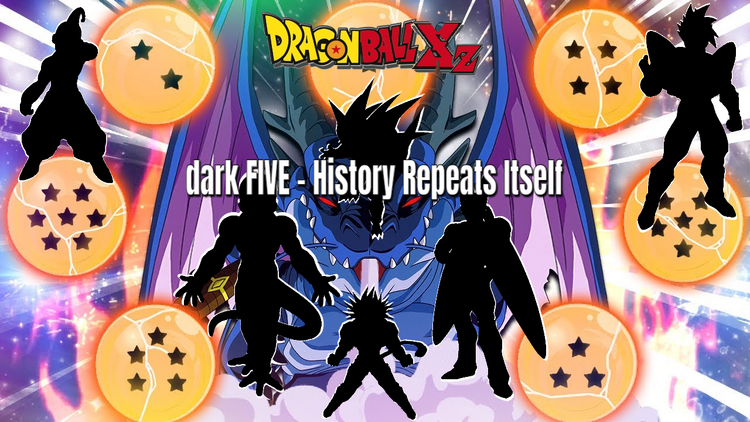 With a sudden flash, the shadow figures come into full view. Behind dark TRUNKS stands Freeza, Cell, Kid Buu, Bebi, and Omega Shenron, though they look different. Each of them is negative their normal look and has glowing eyes and tattoos on their body of a certain color: Freeza - Orange, Cell - Blue, Kid Buu - Yellow, Bebi - Purple, and Omega Shenron - Red.

"I give you the dark FIVE!" dark TRUNKS says laughing.

"That is right," dark FREEZA says.

"We have come back alive," dark CELL says.

"Just so we can get out revenge," dark BEBI says.

Vegeta, Gohan, and Goten all stand up, moving next to Goku and Bardock.

"It doesn't matter how many of our previous foes you revive. We beat them before...," Goku says. As he trails off, all 5 suddenly pose drmatically, "WE CAN DO IT AGAIN!"

dark TRUNKS watches from Kami's old throne as they Saiyans fight the dark FIVE, chuckling miniacly as the screen fdes to black.