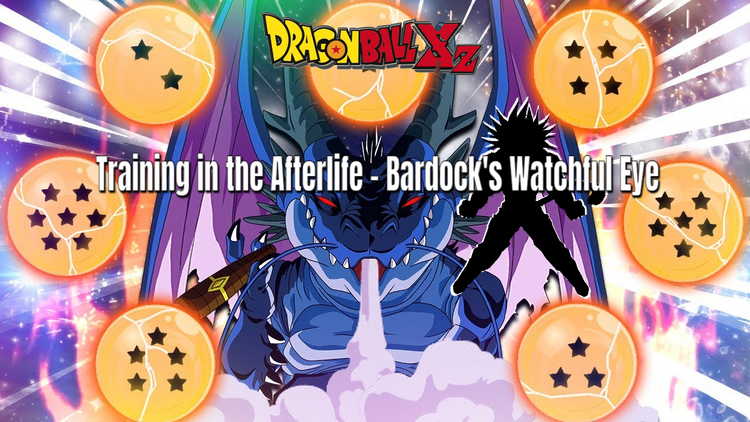 In this episode, Goku, Vegeta, Gohan, and Goten all train and spar on Supreme Kai's planet in Super Saiyan 5. Bardock stands quietly on a mountain and watches them as they fight.

It shows a few flashbacks of Goku's adventures. How he became stronger as a Saiyan, all shown through Bardock's eyes as he watches through King Kai, all leading up to the Big Bang Kamehameha Masenko. The explosion from the teleportation rift snaps Bardock out of it as Goku talks to him.

"So, father. I'm glad I can finally meet you," Goku says.

The camera changes to Earth as they hug. dark TRUNKS is back at the lookout, dropping a Dragonball to the groound. It rolls over and hits another. The camera zooms out and you see all seven Dragonballs there.

"Hehehe. Now it is time to unlock the power of my brother and become invincible!" dark TRUNKS laughs as he summons Shenron.

"ROOOOOOOOOOOAR! HOW DARE YOU ATTEMPT TO AWAKEN ME, BLACK SMOKE SHENRON! I WILL GRANT NO WISH TO YOU!" Sheron roars in his almighty voice.

"Like you have a choice, brother! I have you summoned on contract of the Dragon Balls. I was once trapped within those orbs. I know EXACTLY how they work. I summoned you, therefore you are sworn to grant me two wishes." dark TRUNKS laughs evilly.

"GRRRRR, YOU ARE RIGHT! SO, BLACK SMOKE, WHAT IS YOUR WISH?" Sheron roars, defeated.

"I WISH FOR THE TOOLS TO TAKE OUT THE SAIYANS!" dark TRUNKS yells.

Shenron's eyes glow red. "YOUR WISH HAS BEEN GRANTED!" he bellows. 5 dark figures appear behind dark TRUNKS. He turns to look at them, chuckling a little. The chuckling turns into laughing, and the laughing turns into cackling. The camera zooms out and pans up, his maniacle laughter roaring evilly as the screen turns dark.