Episode 27: Escape to the Afterlife! (Xz) 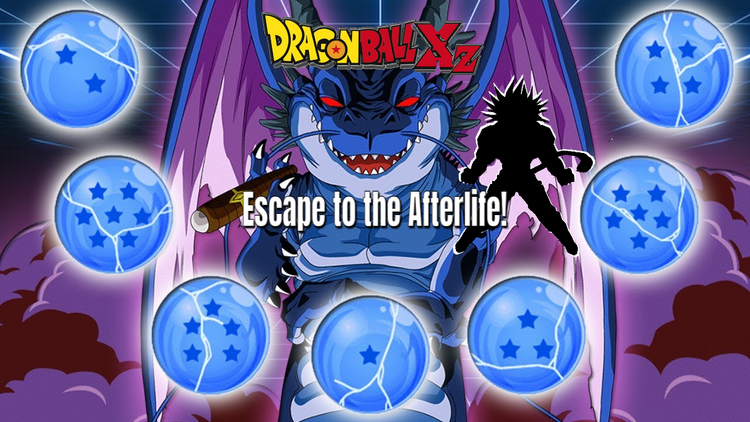 dark TRUNKS fires the Negative Big Bang Kamehameha Masenko at the gang. This time, it is from the perception of the Saiyans instead of drmatic camera angles. The dome appears, blocking the attack. Inside the dome, a dimensional rift violently opens betwen all four of them. As quickly as it opens, the mysterious Saiyan appears, his presence causing the dome to expand outwards. The Saiyan is pulled back into the rift as quickly as he appeared, sucking the others in like a vaccuum.

Goku, beaten and worn, flys through the worm hole, looking around. A second later, he reaches a bright light. As he is engulfed, another rift appears and the four are dumped out onto a grassy field with a yellow sky.

Goku gets up while the others are disoriented and goes "Wow, is this--".

Suddenly, a dark figure appears from the wormhole behind him and interupts him, "Yes. This is the afterlife."

Goku turns around as the others look up. The mystery Saiyan is shown in full.

Goku is shocked. "Wait. What the? You look familiar."

The Saiyan replies, "Maybe I should return to my base form." He detranses.

Vegeta yells out, "Wait, it can't be! You're the Saiyan Bardock. The legendary Saiyan who stood against Freeza before he destroyed Vegeta!"

"That is right," Bardock replies.

"But what are you doing as a Suuper Saiyan 5? I thought Kakkarot was the only one!" Vegeta yells.

Bardock chuckles, "Funny story. You see, ever since I died, I was watching over Goku using King Kai's omnivision. I watched him as he crashed on Earth. From his growth. His fight with you, Vegeta. As he killed Freeza and achieved his Super Saiyan form for the first time, I began trying to become one as well. I believe I succeeded shortly before Freeza came to Earth."

Vegeta says, "Wait, you're telling me that I wasn't the second Super Saiyan?!"

"That's right," Bardock says, "I trained as Goku grew and used his learnings to grow myself. When I training to go Super Saiyan 5, I noticed dark TRUNKS fire the Big Bang Kamehameha Masenko. In a panic, that pushed me into the form. By instinct, I opened a worm hole and teleported to Earth. Apparently the power of a Super Saiyan 5 teleporting creates a negative energy barrier, negative beam that touches it. We were lucky with that one, or else we'd all die."

"That's amazing," Goku says before getting really serious, "But what are we going to do about dark TRUNKS? We are stuck here, and he's on Earth, free to do as he pleases."

The screen fades to black on Bardock's face.