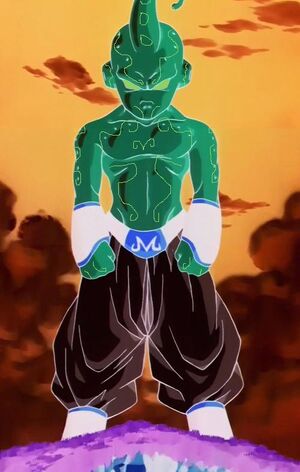 dark Majins are a powerful race of magical creatures. They are a sub-race of dark COUNTERPARTS. They are not a true race in the normal sense. Instead dark Majins are a race created by the Eternal Dragons. dark Majins were first seen when dark TRUNKS wished to his brother, Shenron, that he could have the tools to defeat the Saiyans. This gave him the only dark Majin shown so far, dark BUU, to match Gohan.

dark Majins look exactly like normal Majins, except their entire body is negative and they are covered in colored glyphs.

dark BUU is the dark COUNTERPART of Kid Buu. He has all the powers of the original Kid Buu except he is as powerful as a Super Saiyan 5.