Wsighing at 159 lbs while standing at 5 feet 5 inches, the young Saiyan warrior is short but strong while considered to be rather attractive with a healthy tan as a result of spending a lot more time on planets rather than in space. Her black hair is naturally quite short that never seems to grow any long as a result of her being a pure-blooded Saiyan with two slightly longer locks framing either side of her face. However, Chirei's most striking feature that people always seem to first notice about the Saiyan aside from her prehensile brown fur monkey-like tail, which she normally keeps wrapped around her waist, is the females red eyes that always seem to light up with mischievous glee. In terms of body statue, her physique is athletic and well-defined built with a layer of muscle along her body though this goes rather well with her appearance along with noticeable feminine curves

While compared to other Saiyans, Chirei is usually very cheerful when she's having fun with a happy-go-lucky and somewhat carefree disposition. The female is somewhat of a troublemaker as seen when she is summoned by Shuirika, she will usually assume she is about to be scolded for something that she did. Chirei also becomes easily bored. She is also noted to be somewhat a loud-mouth and reckless in her actions. Chirei is very friendly and eager to make friends. In her love of having fun, Chirei is also be fearless such as jumping to fight a mysterious danger in seeing it only as exciting. She is energetic and having a somewhat perverse nature as well as being somewhat fiery but playful though when it comes to fighting she becomes serious, cocky and way too sure of her self. She loves to fight especially against strong opponents as she often comments that she feels truly alive when in the heat of battle pitting herself against her opponents which is the reason for her attitude when it comes to fighting. While Chirei is a terrible cook herself, this does not mean that she doesn't enjoy eating it as she has a passion for food and is always willingly to try new and exotic foods. 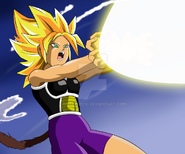 Chirei as SSJ
Add a photo to this gallery
Retrieved from "https://dragonballfanon.fandom.com/wiki/Chirei?oldid=357851"
Community content is available under CC-BY-SA unless otherwise noted.