Chilan(□□□□□ Qǐ lán)(Pronounced Chee Laan) is a Saiyan female featured in the Dragonball AE fanfic. Her Chinese name is the word for the vegetable Kai-Lan.

Chilan was one of the Saiyan females(although not named) rescued from Planet Rikmin before every other Saiyan was killed so the Rikmin could live in peace. She hung at the back of the group, because she immediately fell in love with Zeku.

Chilan's next appearance(again not named) was when Zeku was training the Saiyan females for the battle against Rush, and she was the only one that achieved Super Saiyan level. She did not fight, rather she appeared right before Rush and Zeku Super Saiyan 5 began fighting. She(finally named) is one of the warriors Zeku chose for his journey to find the demons that Rush released. In the time span between the Rush and Demon Sagas, Zeku has helped Chilan achieve Super Saiyan 2 and 3.

Kamehameha - A beam of energy shot from two wrists put together and hands in opposite directions. Learned from Zeku. 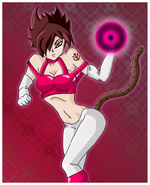 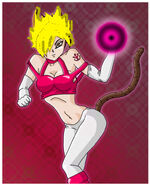 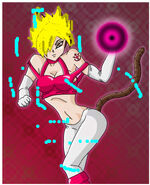 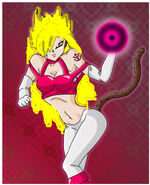 Chilan as Super Saiyan 3
Add a photo to this gallery
Retrieved from "https://dragonballfanon.fandom.com/wiki/Chilan_(DBAE)?oldid=390589"
Community content is available under CC-BY-SA unless otherwise noted.