Bulla (or Bra) is the daughter of Vegeta, also the nagging wife of Brudikai . They met while in high school and months later became friends Bulla has recived some training from her father but isn't really a fighter to begin with. During a normal school day Bulla was kidnapped by Marusia, a queen from Ripple Stout mountains, to force Brudikai to fight her guards.  Brudiaki successfully rescued her and five years after their high school graduation they got married and had their first child Brock aswell as their second child 6 years later Brulla. Bulla cares alot for her family, it turns out she's one of those mothers that get extremely pissed at

times when her family is in danger. Not being afraid to get physical when the time comes. Thats why Brudikai tries his best to stay on his wife's good side. Unlike her "Cannon" version this Bulla does a few bits of training. Thanks to her husband and her drive to keep her children safe Bulla has unlocked the form of Super saiyan through super saiyan 3

Galick Beam- a weaker version of the Galick Gun

Scorn- Bulla fires a beam that resembles fire from her hands. 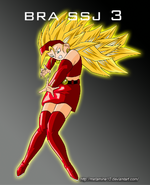 Ssj3
Add a photo to this gallery
Retrieved from "https://dragonballfanon.fandom.com/wiki/Bulla_(U93)?oldid=333803"
Community content is available under CC-BY-SA unless otherwise noted.