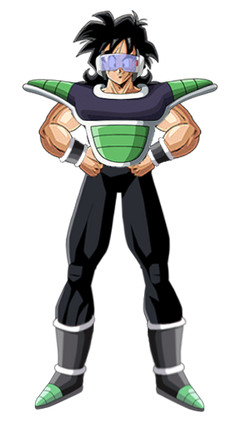 Bio-Yamcha is the clone of Yamcha under Prince Bartek's command, he's the second of the human Z warriors (After Bio-Krillin) to be cloned. He was created after BH Game 3 (Some months after the marriage of Prince Kakarot and Bio-ChiChi)

Yamcha is bassicly an Yamcha the desert bandit with scars - he's rude, agrressive and is shy with women (To be fair, he was cloned to be with Bulma, althought Bulma's clones seem to love Bartek more), he also hates Prince Turles for having his space craft destroyed by his source material (Note that in BH fanfics, Turles never met Yamcha priod to his revival, as Goku met him on his way to Namek and not on Earth), he also hates Prince Kakarot for breaking his tooth, but due to the blood taken from Buu saga Yamcha, he also acts like his adopted big brother

He has long hair, scars, and with the saiyan armor. Like all minions of BH, he wears an dual scouter, green to be exact