Bardock is a character from the parody Dragon Ball Adventure. He is the main protagonist of the movie Bardock vs Frieza.

Bardock and his teammates attacks Planet D**k where they killed all of the people from there. At the next day, Bardock suffers a heart attack.

Bardock wakes up on a healing tank where he notices that he now can see the future, at first sigh he though it was illusions but after notice that these aren't illusions, he unsuccessfully goes to warn King Vegeta about the situation.

Back at Planet D**k, he finds their allies' dead bodies, Toma warns him about what's going on but Bardock acts like a motherf**ker and Toma dies concluding that Bardock is a total douchebag, bad friend and partner.

After Dodoria makes him realize the situation, Bardock finally decides to avenge their friends' death and once again goes to warn the Saiyans, this time going to the Goofy Goober's Ice Cream Party Rock to warn the Saiyans that were there, just to be taunt by them, Bardock gets mad and lift his middle finger before he left to fight Frieza.

Once in the space, Bardock faces Frieza but fails on his attempt to kill him and it's Bardock the one who meets his fate, before he died, he has one last vision. Finally proud of his son, Bardock sings the Goofy Goober Song for the last time as he fell to his death along with most of Frieza's henchmens and most of the Saiyans. 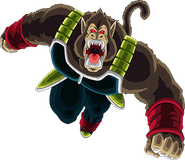 Great Ape Bardock
Add a photo to this gallery

Retrieved from "https://dragonballfanon.fandom.com/wiki/Bardock_(Earth-24257)?oldid=367747"
Community content is available under CC-BY-SA unless otherwise noted.