Bardock is the twin brother of Shich and the husband of Gine, he has two sons Raditz and Kakarot and two dauthers - Pinruta and Kakarota whom he loves but wants them to be ruthless killers and make him proud. When learned about Freeza's betray, he challenged him to a fight but perished, with the rest of the saiyans (minus Raditz, Goku, Kakarota, Pinruta, Nappa and Vegeta), elsewhere the Hamsternid prince Bartek watched the whole event and decided to wish him back and make him his daddy

Bardock was brought back to life by Goku along with his wife, Turles, Broly and Raditz two years after movie 13. He has a deep relationship with his youngest son, willing to take his life to save him, later he was cloned, he also adopts Turles as his son. His visions are still with him as he sees his grandauther Pan before he dies (but he returns to life and dies again 100 years later)

Bardock wears his normal outfit in the first chapter, switching to his Earth one later on, He now wears a bandana, medium sleeve blue t-shirt and dark blue pants, in some versions the leg pads also appear, he also has his son's arm bands (but red). In DBGT he wears an vest and returns to wearing his long red armbands he had when working for Freeza.

learned while training in the chamber

In the first version he wanted to have a pyjamas to sleep but this was changed to not make him so much pussy, he also didn't appear with his wife Gine, as the fanfic was written before Gine even existed

He fights along the saiyans against Vegito's clone barely winning, he later fights Cooler and Freeza as a false Super Saiyan, and his clone, Evil Bardock, he was killed by BH in the final chapter of the BH saga after he kills his son in a very gory way

Despite Bardock being prince Bartek's fav. character, he usually gets killed in his fanfics

Before his death, Bardock had a violent and barbaric nature, but still an caring person to his kids, wife and team mates. Upon losing evil, Bardock has a very nice personality, not cursing anymore, however once BH killed his son, Bardock began using the cursing once again 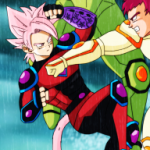 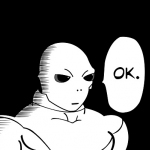