Android 21 also known as Sarah is human female who was converted into a cyborg by Miller. She first appears in the Machine Arc of the Dragon Ball Galaxy fan-fiction series.

Sarah was born in Age 734 to two unnamed parents in City P. When she was 4 years old, she was separated from her parents when Piccolo attack the city. Terrified and in distressed, she wander the streets of the ruined city that was littered with corpses. She was then found by a 18 year old Mercury, who takes her to safety at the safe zone. After the defeat of Piccolo, Mercury would stay and take care of her, until her parents were found. For the next 8 months, Sarah grew close to Mercury and considered him as a uncle. Mercury takes her to a Theme park called Red Isles and would gain lasting memories. One day, her parents were found and she reunites with them. She is sad to leave Mercury, but he reassures her that he will always see her.

Mercury continued to visit for the next two years, but in Age 743 she was kidnapped by Miller and her parents were murdered.

Sarah had to endure gruesome condition and experimentation in the hands of Miller and a Dr. Gero. In Age 753, Sarah was infused with a unknown alien technology causing her skin to turn pink and have white hair. It also caused her to grow a long tail. She was perfected and she along with a Bio-Android called Cell were completed, but Cell attacked and killed Dr. Gero and Sarah use the opportunity to escape, by Miller used a remote control to deactivate them. He placed them and stasis for the time being. Throughout the whole nightmare, Sarah focused on Mercury and hoped to reunite with him. Because of this she never went insane. She was later designated as Android 21 by Miller.

In the Alternate Age 760, she along with Cell was reactivate by Miller to destroy the remaining Z-Fighters and the Regiment, but Cell kills Miller instead. For the first time in 17 years see Mercury again, she wanted reveal herself, Cell fired his Planet destroying Ki into the Earth's core. She hid herself from the fight between Cell and the regiment, but suddenly Miller's programming takes over her and she helped Cell wipe out the Regiment. She joins Cell to pursur the last escaping humans but is confronted by Mercury, who was the stayed to cover the last Transport. Seeing the sight of Mercury somehow caused her to break free of the program, but she was too late to stop help Mercury for the Planet had exploded, leaving her and Cell as the survivors. Her programing reactivates and she consumes Cell and wreaks havoc to the Galaxy, she eventually finds the Gete Star and is absorbed by it.

In the Present Age 760, she along with Cell was reactivate by the Cyborg Miller to help him destroy the Z-Fighters, but Cell destroys Miller instead. For the first time in 17 years see Mercury again, she wanted reveal herself, Cell prepares fired his Planet destroying Ki into the Earth's core, but is stopped by Future Naomi, Future Jay and Future Virginia. She hid herself from the Z-fighters while Cell was fighting the trio. When Cell unleashed a blast the injured the all the Z-fighters, 21 make her move turns Cell into a cupcake and consumes him. She then notice the Mercury was alone and saw the whole thing. This was her chance, she approached the injured Mercury, and heals him and surrenders. Mercury does not recognize her. but she reminds him of the 4 year old girl he save and took care off. Mercury was Shocked. 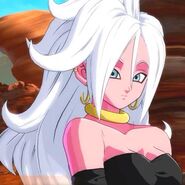 Sarah during the War of the Universes Arc
Add a photo to this gallery
Retrieved from "https://dragonballfanon.fandom.com/wiki/Android_21_(DBG)?oldid=387455"
Community content is available under CC-BY-SA unless otherwise noted.