Aksana was born in age 737 on the original Planet Vegeta but was taken to Planet Vegeta II because she was only an infant and couldn't fight in the war with Frieza's army. Aksana grew up taking on missions to exterinate the life forms of planet after planet and was paired with Broly and his team of saiyans, and took a liking to him. Age 755 the two saiyans mated and 9 monthes after in age 756 they had a son named Brudikai. Broly soon snapped after a short meeting with his father Paragus and murdered him, Broly then set is sights on the family he made. Aksana launched her son in a saiyan pod to a random planet to save his life, Aksana was then found and killed by her husband.

23 years later Brudikai finds out what happened to his biological mother and makes a wish on the dragon balls to revive her. He sets off to Planet Vegeta II to find her and bring her to Earth. 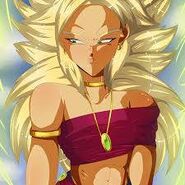 ssj
Add a photo to this gallery
Retrieved from "https://dragonballfanon.fandom.com/wiki/Aksana?oldid=340368"
Community content is available under CC-BY-SA unless otherwise noted.