Akira and Jak are the children of the Shadowian Reyjo and the Saiyan Dylan.

The twins have gray hair and slightly golden eyes. The female twin, Akira, is an inch taller than Jak. Both are loud and usually let their presence be known. Akira keeps her tail hidden around her waist while Jak lets his curl up from behind him, and usually revels it scaring other children in his class. Jak wears a gray sweater and baggy pants, but Akira wears dresses and slip-on shoes. When training, Akira wears the Saiyan armor her mother made, and Jak wears the armor of a Shadowian created by his father.

The twins are not able to go Super Saiyan because of the conflicting blood, but they can harness energy from each other and fuse to create Akirak. They do not need the Moon or any special articfial moon to become Great Apes/Cats. In those forms, Akira is shown as catlike and Jak apelike. Both have red eyes and gray fur. When in these forms, they are in control of themselves, but not when fury blinds them. 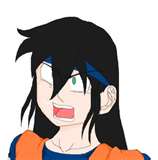 Their aunt Sins
Add a photo to this gallery
Retrieved from "https://dragonballfanon.fandom.com/wiki/Akira_and_Jak?oldid=332223"
Community content is available under CC-BY-SA unless otherwise noted.